What is Raft Foundation?

A raft or mat foundation consists of a large concrete slab or a slab and beam system resting on soil or rock and supporting all the loads through a number of columns or walls.

When the raft foundation is supported on piles, it is called a piled raft.

In this article, you’ll learn all about Raft or Mat Foundation, Types of Raft Foundation, its Design, etc. in details. 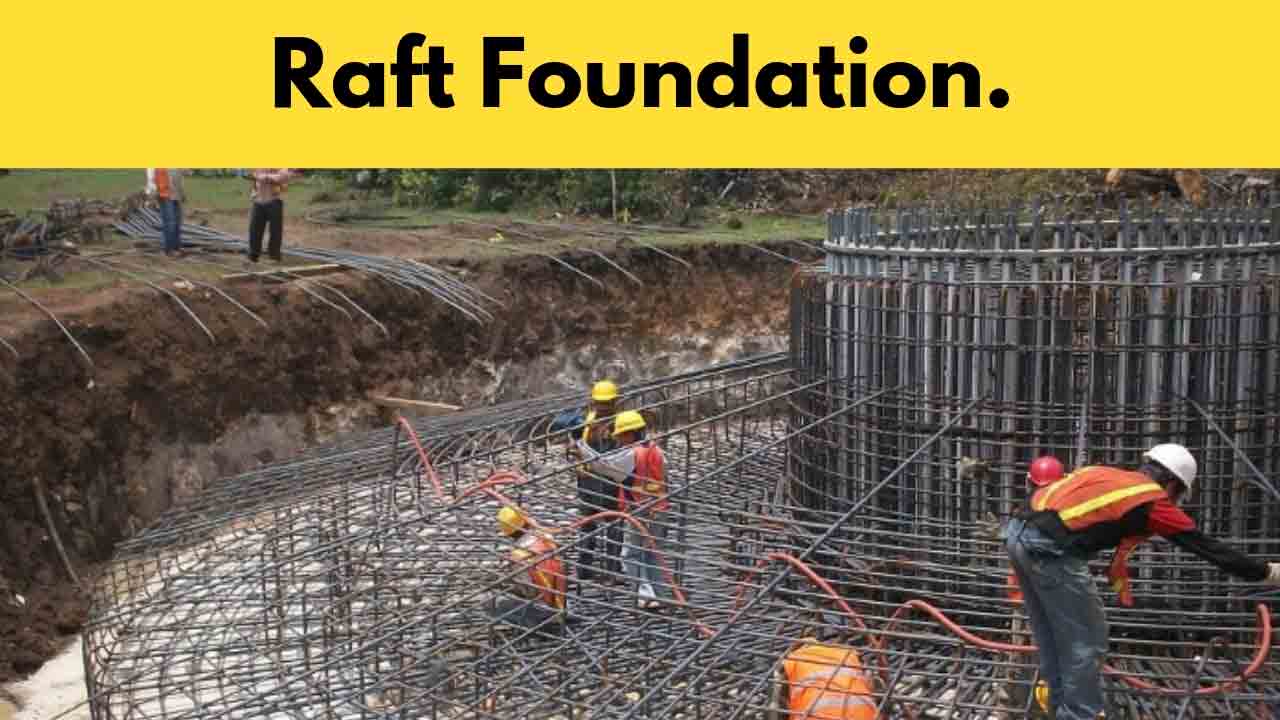 Situations where Raft Foundation is Used.

Raft foundation is used under the following conditions:

1. In structures like chimneys, silos, cooling towers, buildings with basements where continuous water proofing is needed;

and in floating foundations where a rigid structure is needed to reduce settlement.

2. Where differential settlements in the structure are to be reduced.

As observed by Terzaghi and Peck, the differential settlement in rafts is only one half that of footings of the same intensity of loading due to the random distribution of compressible zones.

And also due to the stiffening effect of the raft and building frame.

Due to continuity and negative moments, the bending moments produced in rafts tend to be less.

Thus, an allowable maximum settlement of 50 mm is usually specified for raft foundations.

whereas for footings only 25 mm is specified for the same allowable differential settlement of 18 mm (3/4 inches) for both cases.

3. Mat foundation is specified to bridge over pockets of weak spots in moderately weak soil.

In such situations, careful analysis should be made as to whether individual footings or rafts are more economical.

In general, where settlements expected are small, individual strips and footings tend to be cheaper than rafts, which will require much more steel to carry increased shear and bending moments due to continuity.

5. It is very important that when we adopt a raft foundation, we should carefully check whether there are any weak spots below the foundation.

As the influence of the foundation is felt to a depth 1 to 2 times its breadth below it.

we must be aware that the bulb of pressure of wide rafts extends to deeper layers than in footings.

In situations, where there are soil deposits below hard layers, individual footings should be preferred over rafts.

6. It is also a usual practice these days to use mat foundation over piles to reduce settlements.

For this purpose, only part of the load is taken by piles.

These are called piled rafts.

Types of Raft Foundation And Their Uses.

Rafts can be classified as follows ##(shown in below figure): 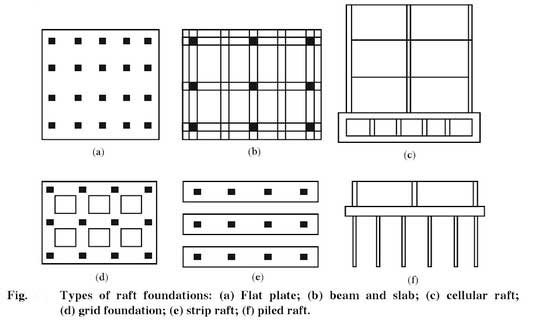 Plain slab raft foundations are flat concrete slabs with or without pedestals.

(Due to difficulties and hazards in construction, the up-stand beams with compacted granular materials between beams covered with mass concrete is more popular, than down-stand beams.)

A stiffened edge raft with the peripheral down-stand or stepped down beam can also be used as a cut off against ingress of water to the ground floor and is very popular in practice.

Such procedures are used mainly for very weak soils.

This sharing of loads is a means to reduce settlement in buildings.

Strip rafts and grid foundations are also generally designed on the same principles as mat foundation.

Loads on Raft or Mat Foundation.

Mat foundation can be subjected to vertical loads, horizontal loads and also to moments from column members.

The total loading from a block of flats of R.C frame and brick infill and plastered finishes will be about 12.5 kN/m2 per story compared to a live load of 2 kN/m2 assumed for the design of floors.

Thus, for a four-story apartment (ground + three) the ground pressure will be only about 50 kN/m2.

(In general, the column loads of a four-story residential flat will vary from 20 to 80 tons, with the mean column load of 40 to 50 tons).

We may also take a higher load of 25 kN/m2 for the ground floor.

Horizontal forces like wind and earthquake increase the vertical loads in one part and reduce them in other parts.

They may also produce moments at the base of columns, which in turn, will influence the raft pressures.

Watch the video for better understanding raft or mat foundation.

For a successful design, the layout of mat foundation should be carried out with due consideration of both settlements and bearing capacity.

For example, the flat slab analogy which has been very successfully used in many cases has also led to structural failures in many other cases due to lack of understanding of the basics.

It is very evident that the flat slab analogy based on small deflection is valid only where the differential settlement between columns is small.

In situations, where the differential settlements an large, flat slab analysis will never give us satisfactory results.

Basically, the following two approaches have been used for the design of raft foundation.

1. Rigid foundation approach (empirical approach without considering the nature of the soil).

The rigid raft is designed either as a floor system, (flat slab or two-way slab) or as a series of combined footings in X and Y directions.

Only the bearing capacity of the soil (but not its flexibility) is taken into consideration.

In the flexible foundation approach, we have the two models namely the Winkler Model and the Elastic Half Space Model.

Here also we may design the whole raft as a single system using sophisticated software programs like finite element method.

Or analyze them as a series of beams on elastic foundations in the X and Y directions by elemental analysis.

In any case, we give about 1.5 m extensions of the raft (or an edge beam) at edges, to take care of the uplift and other edge conditions.

Methods of Design of Raft Foundations.

The following are some of the recommended methods used for analysis of raft foundations for buildings on columns.

(The method to be used depends on the relative rigidity of the raft with respect to the foundation soil.)

2. Winkler model analysis as plates or beams on elastic foundations.

3. As plates on beams on elastic half-space (elastic continuum).

The detailing of steel should comply with standard practice with both faces pedaled with equal steel;

to compensate for the lack of knowledge of the signs of the bending moment in a real raft foundation due to the variation of foundation conditions.

A simple rule is to use a slab depth 50 mm in excess of the greater effective depths obtained from punching shear and bending moment considerations.

Minimum steel of 0.5 percent is to be provided on both faces (totaling 1%) in each direction of the slab.

Analysis of raft foundation is a very complex soil-structure interaction problem as it is very difficult to estimate the soil parameters involved.

Any practical method should consider not only the contact pressures but also the long and short-term settlements that can be produced in the structure.

In important cases, the trial must be made for a range of values rather than one single soil characteristic.

The exact points of maximum and minimum moments and points of contraflexure are impossible to predict.

It is therefore very important that the detailing of steel we use should conform to the standard practice of detailing of reinforcements recommended for mat foundation.

In general, reinforcements are provided both at the top, and bottom layers in both directions and the amount should not be less than 0.5 percent of the section in each layer.