This classification indicates the depth of foundation installation.

A shallow foundation is one which is placed on a firm soil near the ground, and beneath the lowest part of the superstructure.

A deep foundation is one which is placed on a soil that is not firm, and which is considerably below the lowest part of the superstructure.

There is no exact definition which distinguishes one from the other. 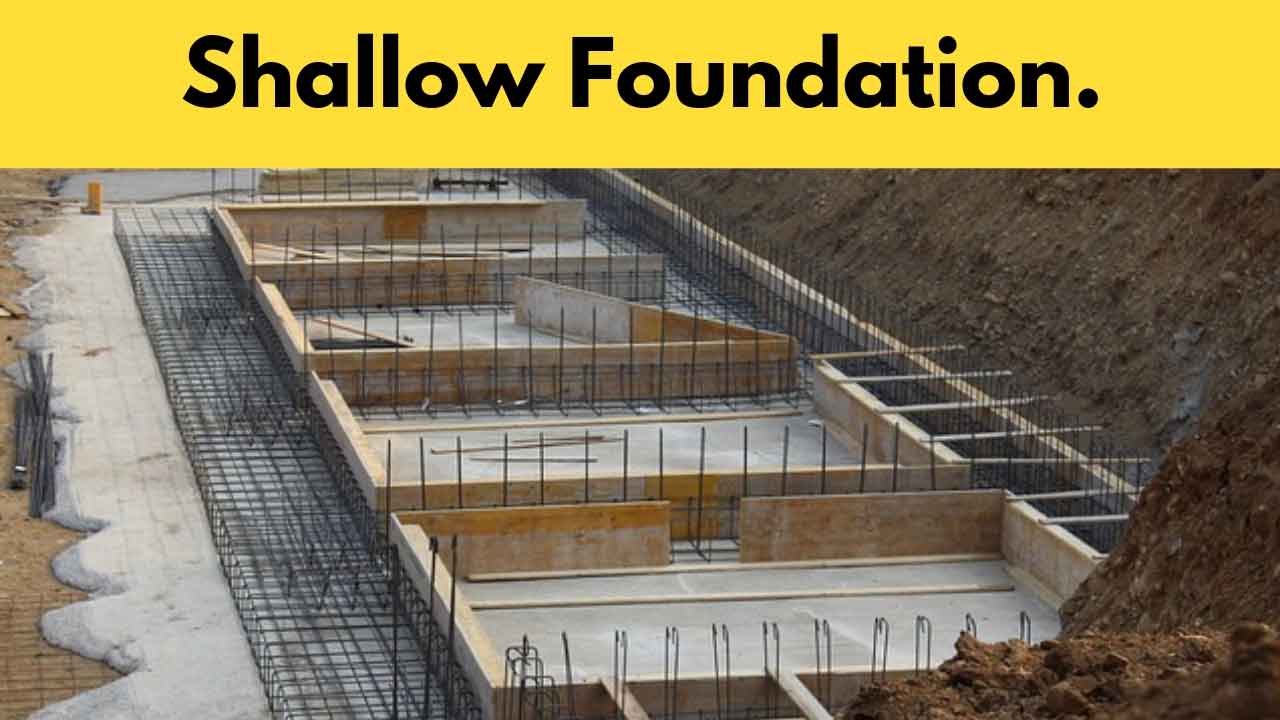 While considering a shallow foundation for a given loading system, the foundation must meet certain design requirements.

The three basic requirements are as follows:

1. Foundation placement, which involves the location and depth of foundation, requires a careful investigation of the past usage of the site and detailed information of the sub-surface stratum.

The foundation placement should be such that any future influence should not affect its performance adversely.

2. Safety against bearing capacity is a requirement that involves suitable proportioning of the footing to avoid a catastrophic collapse of the soil beneath the foundation.

This occurs if the shear strength of the soil is inadequate to support the applied load.

Watch the video below to understand the settlement of shallow foundation.
This requirement makes it essential to have complete knowledge of the geo-technical properties of the soils and rocks involved.

3. Tolerable foundation settlement involves keeping a check on the excessive settlement of a structure.

This again requires a complete knowledge of the geo-technical properties of the soil to assess the anticipated settlement of the structure and the time required for completion of the same.

Shallow foundations are subdivided into a number of types according to their size, shape, and general configuration.

They are described below.

This type of shallow foundation is the most common of all types of footings involving minimum cost and complexity of construction (##Fig. 15.1a).

It necessarily provides the function of distributing the column load to a value compatible with the strength and deformation characteristics of the soil or rock on which the foundation is placed.

These types of footings are also known as pad footings, isolated footings, and square or rectangular footings (for an  L/ B ratio less than 5).

These footings are formed by combining two or more columns (even with unequal loadings) into one footing.

This arrangement averages out and provides a more or less uniform load distribution in the supporting soil or rock and, thus, prevents differential settlement.

These footings are usually rectangular in shape but may be modified to a trapezoidal one to accommodate unequal column loadings (or columns close to property lines).

And provided with a strap to accommodate wide column spacings or column close to property lines ##(Fig. 15.1b).

These footings carry closely spaced columns or a continuous wall so that the load intensity is low and uniform on the supporting soil or rock ##(Fig. 15.1c).

In such footings, the load per unit length is considered accordingly.

The load intensity is given in terms of force per unit length of the footing.

These footings are also referred to as strip footings or wall footings (for an L/B ratio greater than 5).

These are characterized by the feature that columns frame into the footing in two directions.

Any number of columns can be accommodated, and the number can be as low as four ##(Fig. 15.1d).

Mat foundations are recommended for poor foundation soils and when the total area of footings exceeds 50% of the total plinth area.

The total load of a structure may cause a pressure that is more than the safe bearing capacity of the soil or an excessive settlement.

In such cases, instead of changing the foundation size, the structure may be placed at a greater depth.

The technique where a load of a structure is partially adjusted by the relief of load due to excavation is called partial flotation, and if fully adjusted it is full flotation.

These techniques are suitable for light structures on soft or loose soils and for heavy structures constructed over a limited area. 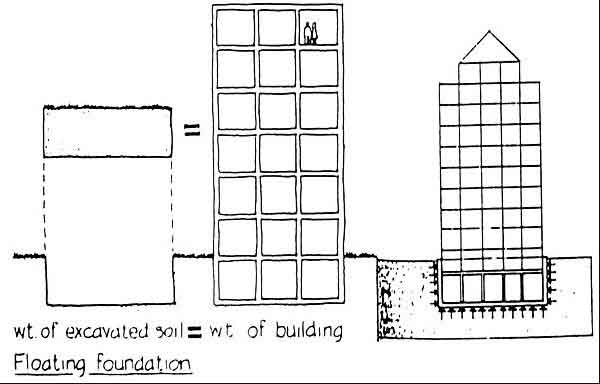 Design Steps For a Shallow Foundation.

Generally, a footing may have to carry a load-bearing wall or a single column or more than one column to support the structure.

Columns generally carry different loads depending on the location and based on the type of structure.

Each column has to carry a different type of load, and the major areas are dead and live loads.

Further, the entire amount of live load is not borne by the column for the entire life period.

Hence, it is generally considered a service load which will be applied on the column during the entire lifespan, which is taken as dead load plus 50% of the live load for ordinary buildings.

A large percentage of live load should be used in warehouses and other storage floors.

The design of column footings based on service loads is generally adequate.

Footings may be designed by adopting the following procedure (Teng 1962):

1. Calculate the loads acting on the footing.

4. Obtain the pertinent field and laboratory measurements and test results.

5. Determine the depth and location of the footing.

6. Determine the bearing capacity of the supporting stratum.

9. Check the stability of the footing against sliding, overturning, and uplift pressures.

10. Estimate the total and differential settlements.

12. Assess the need for foundation drains, waterproofing or damp proofing.

3 thoughts on “What is Shallow Foundation? Its Types, Design Steps.”