Bearing Capacity of Soil can be defined as: “The power of soil which can bear the load of foundations acting on it to a maximum extent.” OR,

“That property of soil which can withstand against the loads and pressures acting on it.”

What is Bearing Capacity of Soil?

The bearing capacity of a soil is the maximum load per unit area which the soil or material in the foundation, maybe rock or soil, will support without displacement.

If a soil has a high bearing capacity, then it will bear high loads and pressures, which is an excellent indicator.

Structures which are constructed on soil having low bearing capacity will make the structures prone to settlement and, hence, failure will occur.

How to Calculate Safe Bearing Capacity of Soil?

Test for Bearing Capacity of Soil.

The bearing capacity of soil can be tested by the following methods:

How to improve Soil Bearing Capacity?

It happens, sometimes, that the required safe bearing capacity of the soil is not available at shallow depth or it is so low that the dimensions of the footings work out to be very large and uneconomical.

Therefore, on such circumstances, depending on the site conditions, it becomes necessary to improve the bearing capacity of soil.

Following are the methods of improving the bearing capacity of soil. 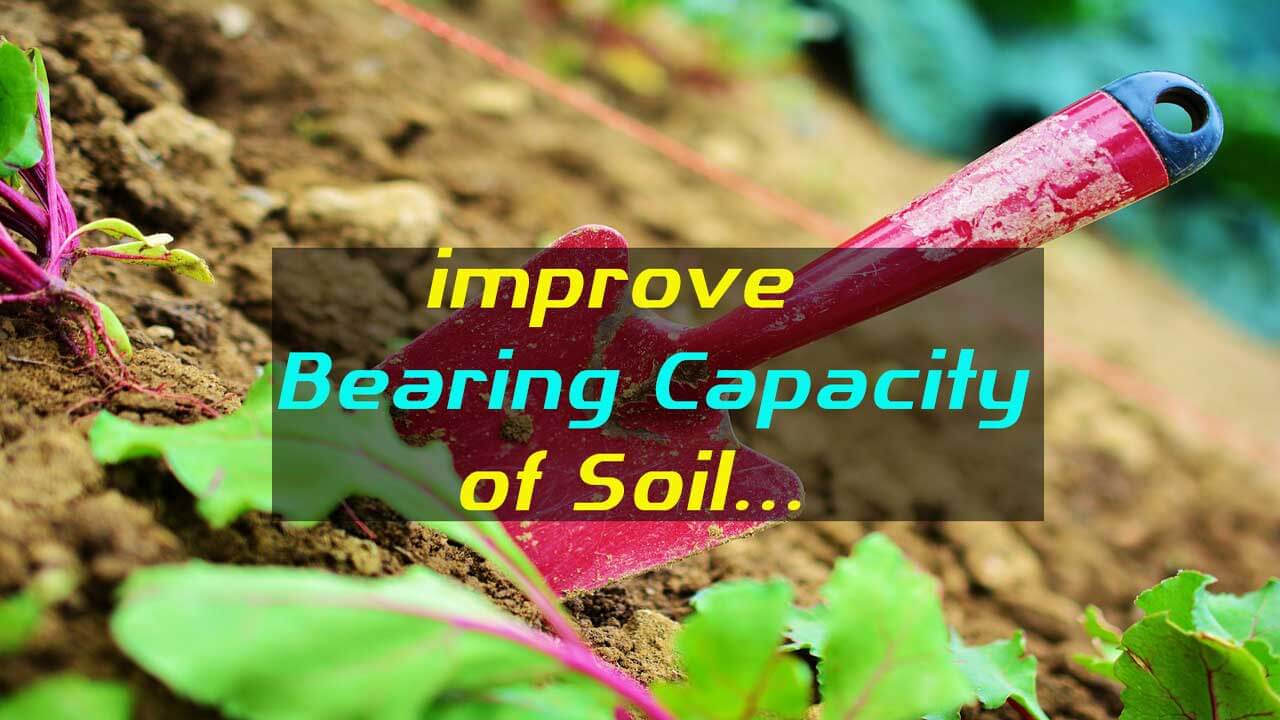 1. By increasing the depth of the foundation:

In most of the cases, the bearing capacity increases with the depth due to the confining weight of the overlying material.

This method is not economical because the cost of construction increases with the depth and the load on the foundation also increases.

This method should not be used on silts where the subsoil material grows wetter as the depth increases.

2. By draining the soils:

The presence of water decreases the bearing capacity of the soil.

Some studies have shown that around 50 percent of bearing capacity is lost in sandy soils due to the presence of excess water.

Suitable drains should, therefore, be provided in the foundation channel to drain off the excess water.

3. By compacting the soil:

Compaction reduces the open space between the individual particles of soil, and hence, they are less liable to displacement, thereby it will indirectly increase soil bearing capacities.

By driving piles or by packing boulders, compaction to a certain extent can be attained particularly in sandy soils of a loose nature.

The compaction increases the density and strength of the soil and, hence, the bearing capacity.

(1) By spreading broken stone,gravel, or sand or hand packing the rubble boulders and after that ramming well in the bed of trenches.

(2) By driving piles either of concrete or wood or driving and withdrawing the piles and filling the holes with sand and concrete.

4. By confining the soil:

The movement of soil under the action of load can be prevented by confining the ground by the use of sheet piles.

Sheet piles are driven to form an enclosure, which compacts the soil particles. Thus, it will help in increasing the bearing power.

These confined soils can be further compacted for better strength. This method is especially useful for sandy soils below the shallow foundations.

5. By increasing the width of the foundation:

By increasing the width of the foundation, the bearing area increases and, hence, the intensity of pressure decreases.

This method has limited usage since the width of the foundation cannot be increased indefinitely.

6. By replacing the poor soils:

The poor soil is first removed, and then the gap is filled by superior materials such as rubble stone, sand, gravel, or other hard materials.

First, the foundation trenches are excavated to a depth of 1.5 meters, then filled in stages of 30 cm by hard material and finally rammed.

In poor soil bearing strata, a sufficient number of boreholes are driven. Then Cement grout is injected under pressure in the foundation to seal off any cracks or fissures which otherwise reduce its bearing capacity.

This method is mostly employed for fissured cracks.

Chemical solutions like silicates are injected under pressure. They form a gel and thereby unite particles to develop a compact mass, which will increase the Bearing Capacity of Soil indirectly.

This is called chemical stabilization and is used to impart additional strength to soft soils at a deeper depth.

However, the chemicals are added in traces only, but even then it has proved to be costly. That’s why this method is very expensive and is adopted in exceptional cases.

This is a method of reinforcing weak soils to improve their strength and bearing capacity. Coir geo-textiles are found to be very useful in this context.

Thanks for reading this article. Please, Don’t forget to share it.

Read More: What is Residual Soil and Transported Soil?

2 thoughts on “What is Bearing Capacity of Soil? 9 Methods to Improve it.”