Slopes in soils and rocks are ubiquitous in nature and man-made structures.

Highways, dams, levees, canals, and stockpiles are constructed by sloping the lateral faces of the soil because building slopes are generally less expensive than constructing walls. 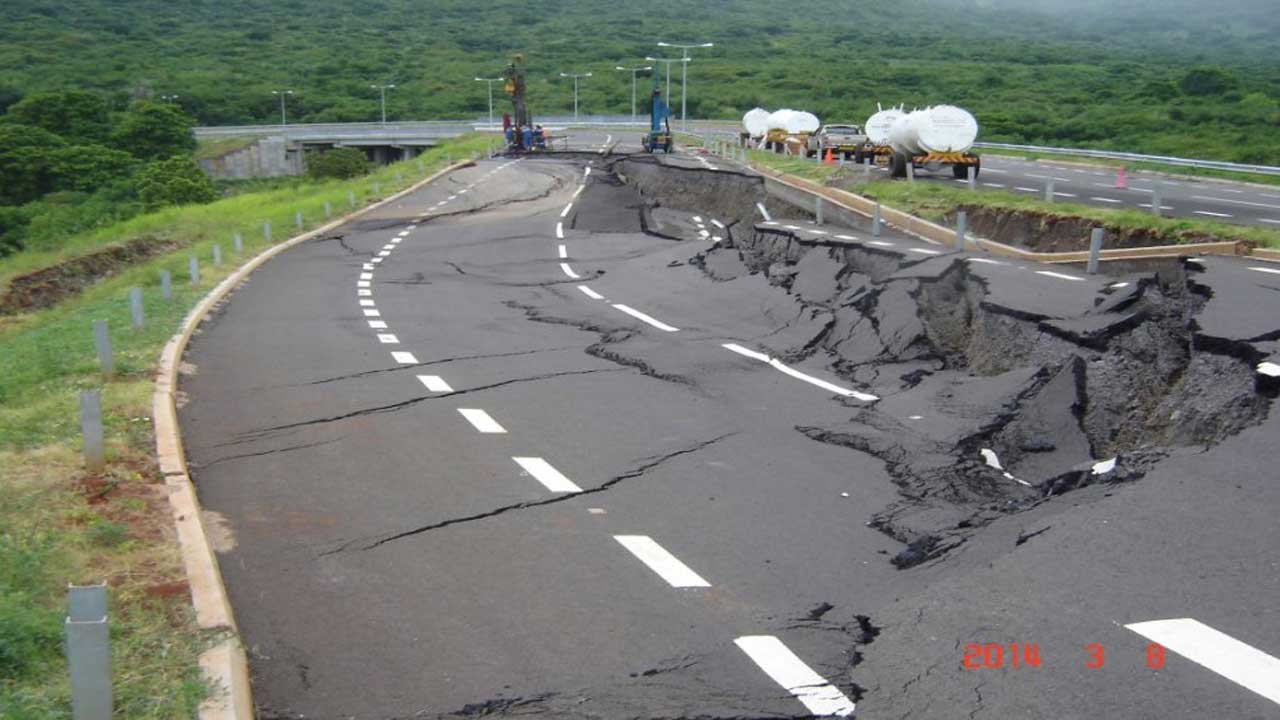 Failures of natural slopes (landslides) and man-made slopes have resulted in much death and destruction, economic losses, and environmental damage.

Some failures are sudden and catastrophic; others are insidious.

Some failures are widespread; others are localized.

Geotechnical engineers have to pay particular attention to geology, surface drainage, groundwater, and the shear strength of soils in assessing the slope stability.

However, we are handicapped by the geological variability of soils and methods for obtaining reliable values of shear strength.

The analyses of slope stability are based on simplifying assumptions, and the design of a stable slope relies heavily on experience and careful site investigation.

A slope failure adjacent to a roadway is shown in Figure 16.1. The failed soil mass can move very quickly over large distances. Your job is to prevent such failure. 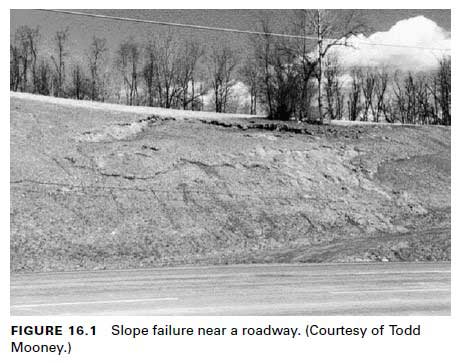 Slip or failure zone is a thin zone of soil that reaches the critical state or residual state, resulting in movement of the upper soil mass.

Sliding mass is the mass of soil within the slip plane and the ground surface.

Slope angle is the angle of inclination of a slope to the horizontal. The slope angle is sometimes referred to as a ratio, for example, 2:1 [horizontal (H):vertical (V)].

Porewater pressure ratio is the ratio of porewater force on a slip surface to the total weight of the soil and any external loading.

Slope failures depend on the soil type, soil stratification, groundwater, seepage, and the slope geometry.

We will introduce a few types of slope failure that are common in soils.

Failure of a slope along a weak zone of soil is called a translational slide (Figure 16.2a). The sliding mass can travel long distances before coming to rest.

A common type of failure in homogeneous fine-grained soils is a rotational slide that has its point of rotation on an imaginary axis parallel to the slope.

One type, called a base slide, occurs by an arc engulfing the whole slope.

A soft soil layer resting on a stiff layer of soil is prone to base failure (Figure 16.2b).

The second type of rotational failure is the toe slide, whereby the failure surface passes through the toe of the slope (Figure 16.2c).

The third type of rotational failure is the slope slide, whereby the failure surface passes through the slope (Figure 16.2d).

A flow slide occurs when internal and external conditions force a soil to behave like a viscous fluid and flow down even shallow slopes, spreading out in several directions (Figure 16.2e).

The failure surface is ill-defined in flow slides.

Flow slides can occur in dry and wet soils.

Block or wedge slides occur when a soil mass is shattered along joints, seams, fissures, and weak zones by forces emanating from adjacent soils.

The shattered mass moves as blocks and wedges down the slope (Figure 16.2f).

What’s next . . . What causes the slope failures that we briefly described above? The causes are many and varied.

In the next section, we will describe some common causes of slope failure. 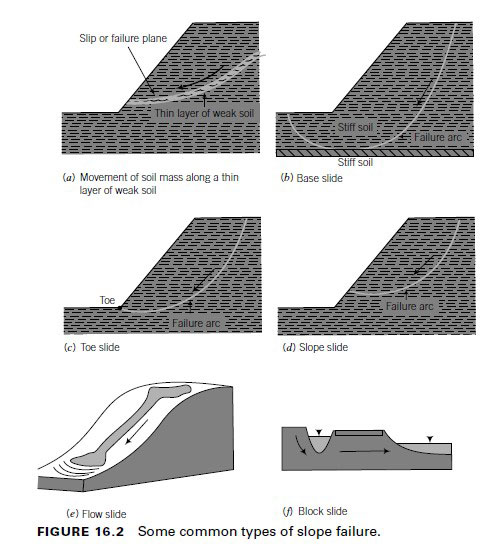 Slope failures are caused, in general, by natural forces, human misjudgment and activities, and burrowing animals.

We will describe below some of the main factors that provoke slope failures.

Erosion changes the geometry of the slope (Figure 16.3a), ultimately resulting in slope failure or, more aptly, a landslide.

Rivers and streams continuously scour their banks, undermining their natural or man-made slopes (Figure 16.3b).

Porewater pressures in saturated coarse-grained soils could rise to a value equal to the total mean stress,

and cause these soils to behave like viscous fluids—a phenomenon known as dynamic liquefaction.

Structures founded on these soils would collapse; structures buried within them would rise.

The quickness (a few seconds) with which the dynamic forces are induced prevents even coarse-grained soils from draining the excess porewater pressures.

A thin seam of silt (a few millimeters thick) under a thick deposit of stiff clay can easily be overlooked in drilling operations,

or one may be careless in assessing borehole logs only to find later that the presence of the silt caused a catastrophic failure.

Loads placed on the crest of a slope (the top of the slope) add to the gravitational load and may cause slope failure (Figure 16.3f).

A load placed at the toe, called a berm, will increase the stability of the slope. 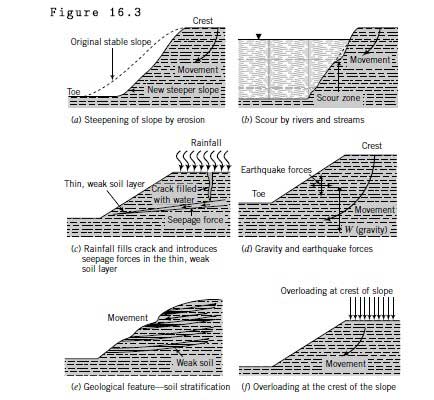 Construction activities near the toe of an existing slope can cause failure because lateral resistance is removed (Figure 16.3g).

We can conveniently divide slope failures due to construction activities into two cases.

The first case is the excavated slope and the second case is fill slope.

Reservoirs can be subjected to rapid drawdown.

In this case, the lateral force provided by the water is removed, and the excess porewater pressure does not have enough time to dissipate (Figure 16.3i).

The net effect is that the slope can fail under undrained condition.

If the water level in the reservoir remains at low levels and failure did not occur under the undrained condition, seepage of groundwater would occur, and the additional seepage forces could provoke failure (Figure 16.3j). 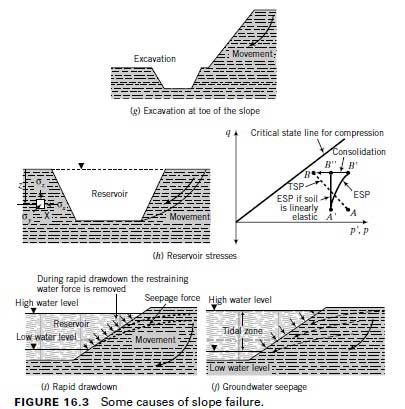 THE ESSENTIAL POINTS ARE:

2. The common modes of slope failure in soils are by translation, rotation, flow, and block movements.