Based on the method of formation, soil may be categorized as residual soil and transported soil.

Residual soils are formed from the weathering of rocks and practically remain at the location of origin with little or no movement of individual soil particles.

Transported soils are those that have formed at one location (like residual soils) but are transported and deposited at another location.

In this article, you’ll learn in details about Residual Soil and Transported Soil. 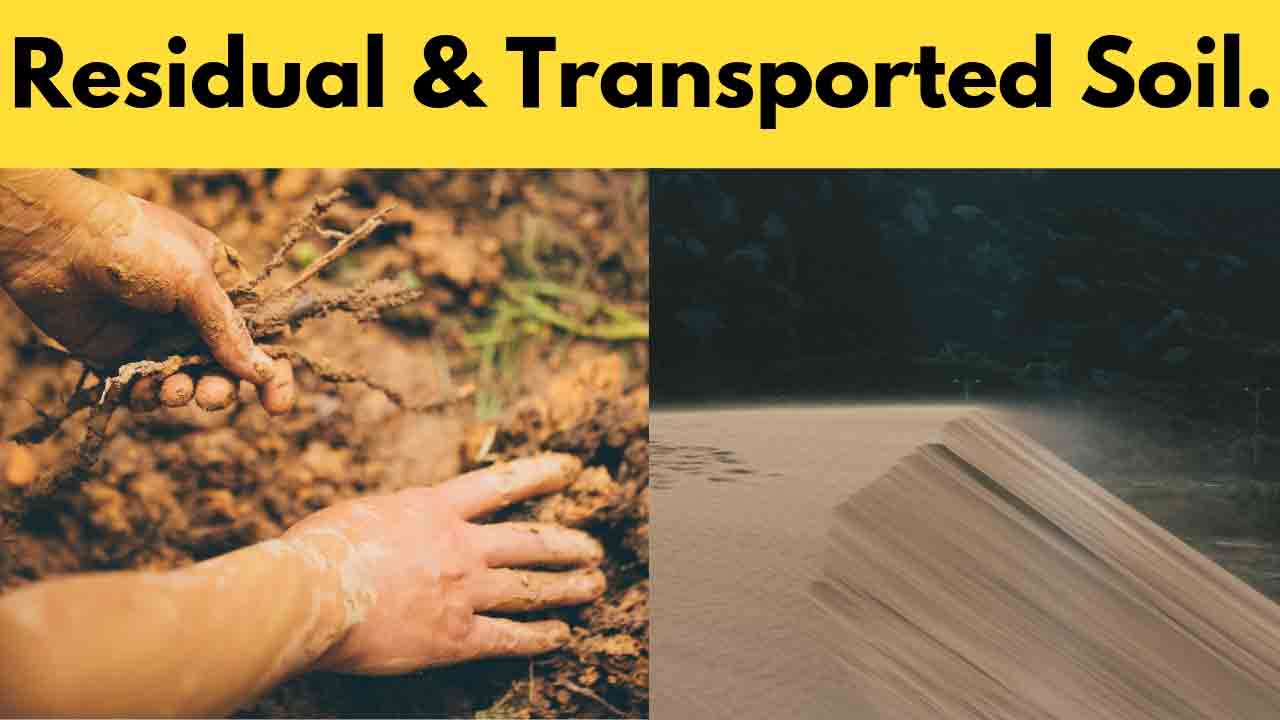 Weathering (due to climate effects) and leaching of water-soluble materials in the rock are the geological processes in the formation of these soils.

The rate of rock decomposition is greater than the rate of erosion or transportation of weathering material and results in the accumulation of residual soil.

As the leaching action decreases with depth, there is a progressively lesser degree of rock weathering from the surface downwards, resulting in reduced soil formation, until one finally encounters unaltered rock. 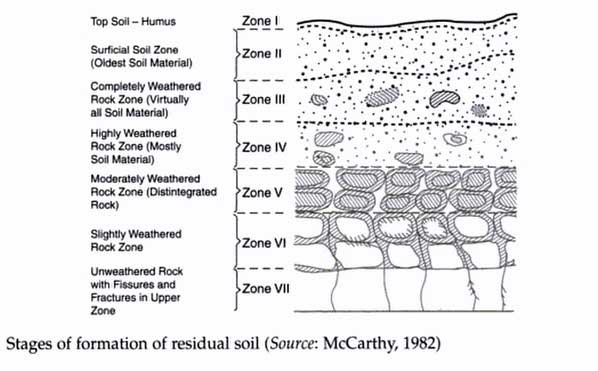 In general, the rate of weathering is greater in warm, humid regions than in cold, dry regions.

Also, because of the presence of vegetation, there is less possibility of transportation of the decomposed materials as sediments.

Sowers (1963) reported that the depth of residual soils varies from 6 to 25 meters in general and from 7.5 to 15 meters in South India. 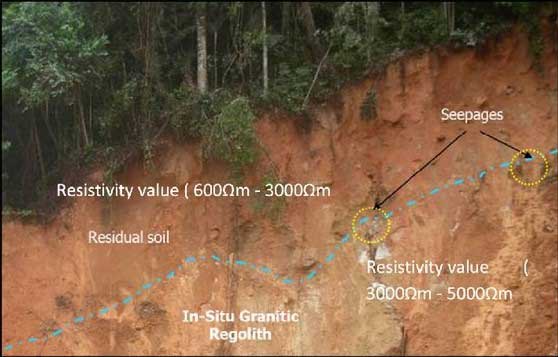 Weathered materials have been moved from their original location to new locations by one or more of the transportation agencies, viz., water, glacier, wind, and gravity, and deposited to form transported soil.

Such deposits are further classified depending on the mode of transportation causing the deposit.

Swift-running water is capable of moving a considerable volume of soil.

Soil may be transported in the form of suspended particles or by rolling and sliding along the bottom of the stream.

The size of the particle that can be in suspension is related to the square of the velocity of the flowing water.

Particles transported by water range in size from boulders to clay.

Coarser particles are dropped when a decrease in water velocity occurs as the stream or river deepens, widens, or changes direction.

Fine particles still remain in suspension and get deposited in quieter waters downstream.

This is a typical case of a stream moving downhill, passing over a valley, and ultimately reaching a large body of water.

Soils that are carried and deposited by rivers are called alluvial deposits. 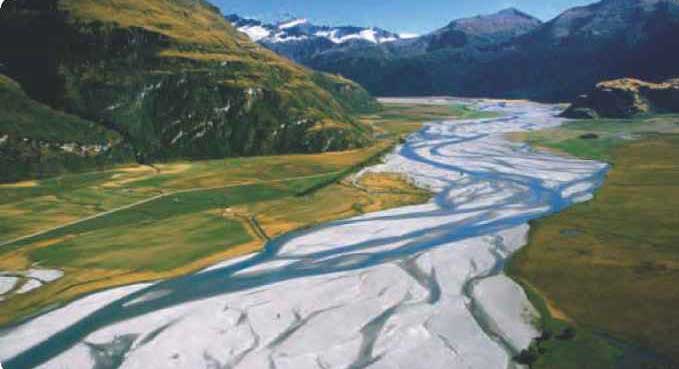 Read Also: What is Bearing Capacity of Soil? & How to improve it?

River deltas are formed in this manner.

Soils carried by rivers, while entering a lake, deposit all the coarse particles because of a sudden decrease in velocity.

But the fine-grained particles move to the center of the lake and settle when the water becomes quiet.

Alternate layers are formed with the season, and such lake deposits are called lacustrine deposits.

These deposits are weak and compressible and pose problems for foundations.

If coarse and fine-grained deposits are formed in seawater areas, then they are called marine deposits.

Marine sediments are made up of terrestrial and marine contributions.

The terrestrial contribution consists of particulate material eroded from the shore, as well as mineral matter, in true or colloidal solution;

and this contribution decreases both in proportion and in grain size with increasing distance from the shoreline.

The marine contribution is represented by the organic and inorganic remnants of dead marine life, and this normally increases with time (Iyer, 1975).

In marine deposits, marine life and environment play a more significant role than the salt concentration of the water.

The clay particles absorb certain chemical elements from the organisms, which in turn can extract mineral substances from sea water.

Some acids produced by the digestive tracts of marine organisms can alter the composition of the clay minerals (Iyer, 1975).

Marine clay deposits (excluding the deep deposits which have been subjected to many further changes and are overlain by other deposits) are generally weak, compressible, and problematic for foundations.

If such a deposit is exposed above sea level and experiences leaching of sodium due to percolation of fresh water, it becomes very sensitive to disturbance.

Glacial soils transported by rivers from melting glacial water create deposits of stratified glacial drift and are referred to as glacio fluvial deposit or stratified drift.

Watch the video below to understand the formation of soil.

Compaction and re-crystallization of snow lead to the formation of glaciers.

Glacier growth and movement depend on the formation of ice.

A glacier moves extremely slowly but deforms and scours the surface and the bedrock over which it passes.

Melting of a glacier causes deposition of all the materials, and such a deposit is referred to as till.

The land form or topographic surface after a glacier has receded is called a ground moraine or till plain. 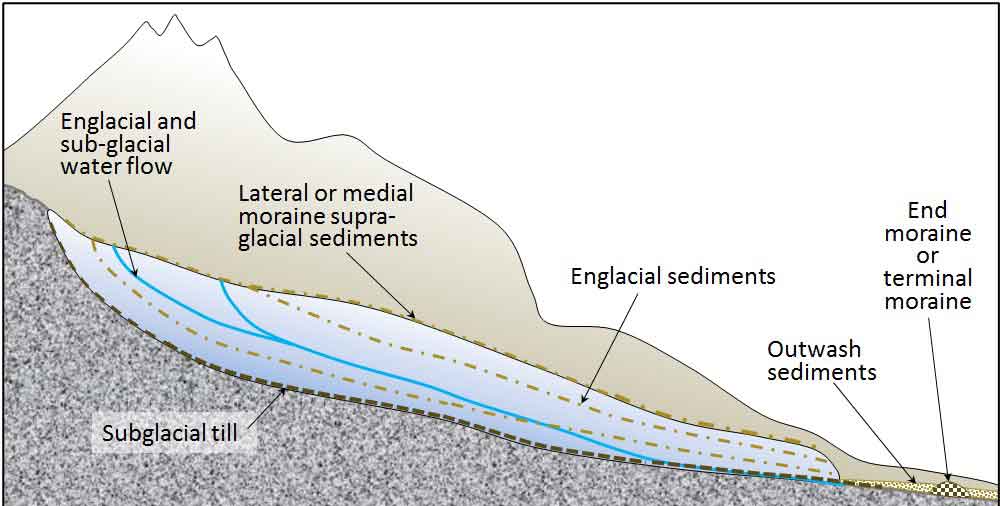 Till deposits which have been overrun by glaciers contain coarser particles and form good construction material.

Soils deposited by the surface and sub-surface glacial rivers that remain in the form of long-winding ridges are called eskers.

They may vary from about 10 to 30 meters in height and about 0.5 km to several kilometers in length.

Isolated mounds of glacial debris varying from about 10 to 70 inches in height and 200 to 800 meters in length are called drumlins.

Large boulders picked up by a glacier, transported to a new location, and dropped are called erratic.

In many locations, it is often found that the material is dense and contains considerable sand and gravel. It is believed that glaciers covered a large portion of the land during the ice age.

Almost all glaciers are now concentrated in Greenland and Antarctica.

Like water, wind can erode, transport, and deposit fine-grained soils.

Soils carried by wind are subsequently deposited as aeolian deposits.

Dunes are formed due to the accumulation of such wind-deposited sands.

Dunes are a rather common occurrence in the desert areas of Africa, Asia, and the USA.

Sands from dunes may be used to a limited extent for construction purposes. 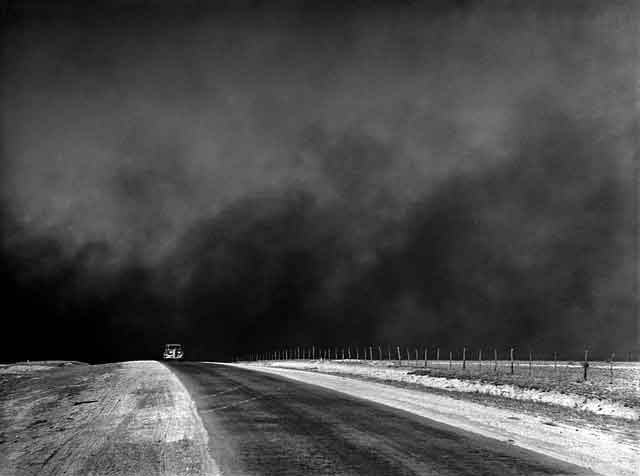 Fine-grained soils such as silts and clays can be transported by wind in arid regions.

Wind-blown silts and clays deposited with some cementing minerals in a loose, stable condition are classified as loess.

Loess deposits have low density, high compressibility, and poor bearing resistance when are in wet condition.

The structure of a loess deposit is susceptible to collapse on saturation.

Gravity can transport materials only for a short distance.

As the movement is limited, there is no appreciable change in the materials moved. 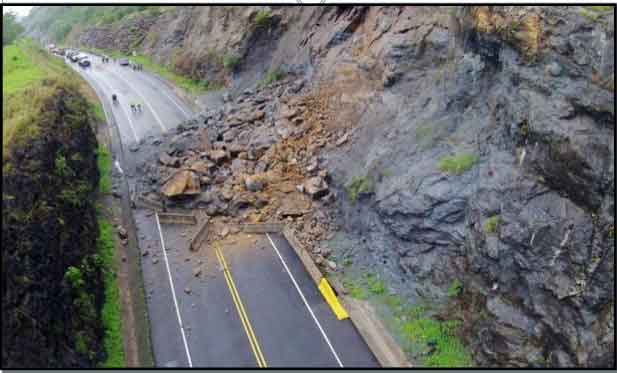 They include the material at the base of cliff and landslide deposits.

The talus material at the cliff is formed due to the disintegration and subsequent failure of the cliff face.

These fragments are generally loose and porous.

In water-stagnated areas where the water table is fluctuating, and vegetational growth is possible, swamp and marsh deposits develop.

Soils transported and deposited under this environment are soft, high in organic content, and unpleasant in odor.

Accumulation of partially or fully decomposed aquatic plants in swamps or marshes is termed muck or peat.

Muck is a fully decomposed material, spongy, light in weight, highly compressible, and not suitable for construction purposes.

Thanks! For Reading This Article. Please, Don’t Forget to Share it.