Skip to content
In this article, you’ll learn in details the Determination of Specific Gravity of Soil by Pycnometer; its apparatus, procedure, result, etc.

Determination of Specific Gravity of Soil Test by Pycnometer.

For determination of specific gravity of soil by Pycnometer’

Volumes of soil solids and water are taken same.

The volume of known weight of soil grains can be obtained by using a container of known volume;

The container of known volume as the volumetric flask or Pycnometer, which holds a standard volume of distilled water at 20ºC.

In routine work, generally, tap water is used instead of distilled water.

This comparison is in the form of ratio and is termed as the specific gravity of the soil.

Together with the soil moisture content and unit weight, specific gravity is frequently used to solve for the various phase relationships, such as void ratio, porosity, and degree of saturation.

Specific gravity is also required in the calculations associated with the grain size analysis, the consolidation, and compaction (Standard Proctor Test and Modified Proctor Test). 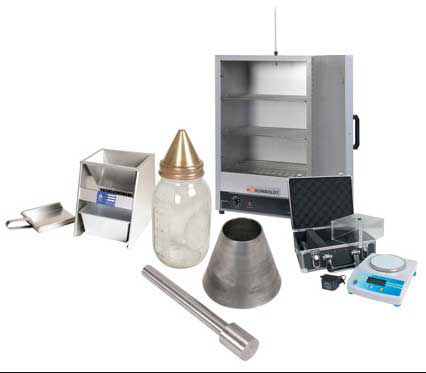 1. Weigh the empty and dry volumetric flask / Pycnometer to the nearest 0.01 gram and record the weight as W1.

2. Take about 100 grams of oven dried soil and put it into the Pycnometer.

3. Now weigh the Pycnometer and dry soil to the nearest 0.01 gram and record the weight as W2.

4. Add water in the Pycnometer until about it is two thirds full. Gently and carefully agitate the mixture.

6. Empty the pycnometer and wash it. Then fill it with water up to the mark and weigh as W4.

7. Repeat the above Procedure three times.

8. Record the temperature of soil water mixture by the thermometer.

Watch The Video Below for Better Understanding.

Typical values of correction factor “a”.

These values can be used as a guide in determining whether the tests result are correct. The typical values of Gs as follow:

2. Shake the Pycnometer well to extract air by fully saturating the soil.

3. Do not shake vigorously.

Q & A about Specific Gravity of Soil.

Ans: Because at 4ºC the unit weight of water is 1.

Q.3: Give the formula to determine the specific gravity (Gs).

Q.4: Give the formula to determine the corrected value of Gs.

7 thoughts on “Specific Gravity of Soil Test by Pycnometer Method.”