Standard Proctor Test is used to determine the compaction of different types of soil and the properties of soil with a change in moisture content.

In this article, you’ll know Standard Compaction Proctor test in details from Apparatus, Theory, to Result and much more.

So Let’s move on.

Compaction is a type of mechanical stabilization where the soil mass is densified with the application of mechanical energy also known as compactive effort.

The mechanical energy may be produced by the dynamic load, static load, vibration, or by tamping.

During compaction, the soil particles are relocated, and the air volume is reduced.

It may also involve a modification of the moisture content, and in the saturated coarse-grained soil, moisture content may be pressed out during the process of compaction.

Compaction should not be confused with consolidation;

where the density of saturated soils is increased due to a reduction in the volume of voids brought about by the expulsion of water under the application of static load. 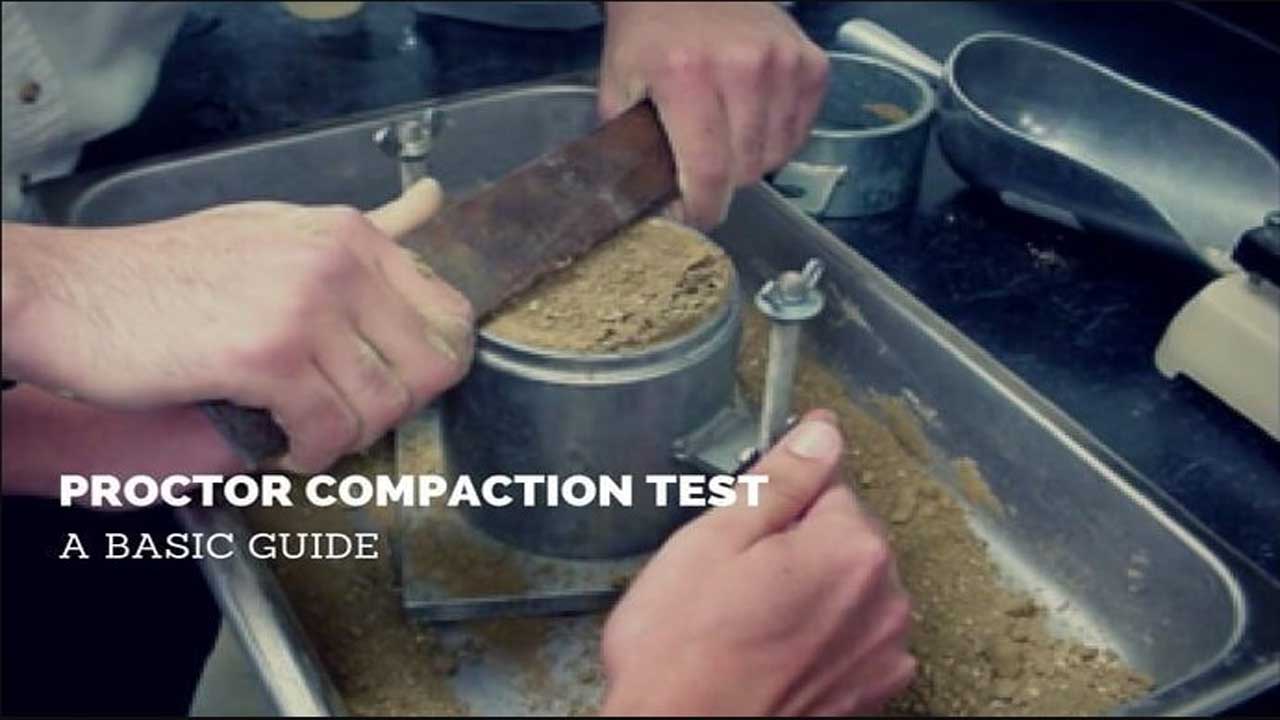 The fundamentals of compaction were first time presented by RR. Proctor in 1933, in his honor;

the standard laboratory compaction test which is developed is commonly called the Standard Proctor Test.

According to Proctor, the compaction of a soil mass is dependent on the following four major factors:

4. Dry density of the soil.

For a given type of soil and compactive effort, the dry density of a soil mass varies with moisture content.

At low moisture content, the internal friction and adhesion between the particles contribute to the resistance to compaction.

As the moisture content increases the particles develop moisture films around them, which help in lubricating the particles, thus increase the workability of the soil mass.

as the water at this stage starts replacing the soil particles and as the unit weight of water is less than that of soil particles the density starts decreasing.

Both the magnitude of compacting energy and the type of compactive effort influence to a greater extent the compaction of soils.

Cohesion less soils are efficiently compacted by Vibrations in the field hand operated vibrating plates, and motorized vibratory rollers of various sizes are used for compaction of sand, gravel, etc.

Rubber-tired roller (pneumatic roller) can also be used for this purpose.

Fine-grained soils may be compacted in the laboratory by falling weights and hammers (rammers) by special kneading compactors, and even under static pressure applied by compression machine.

In the field, sheep foot rollers, rubber-tired rollers and other type of heavy compaction equipment including hand tamper may be used. 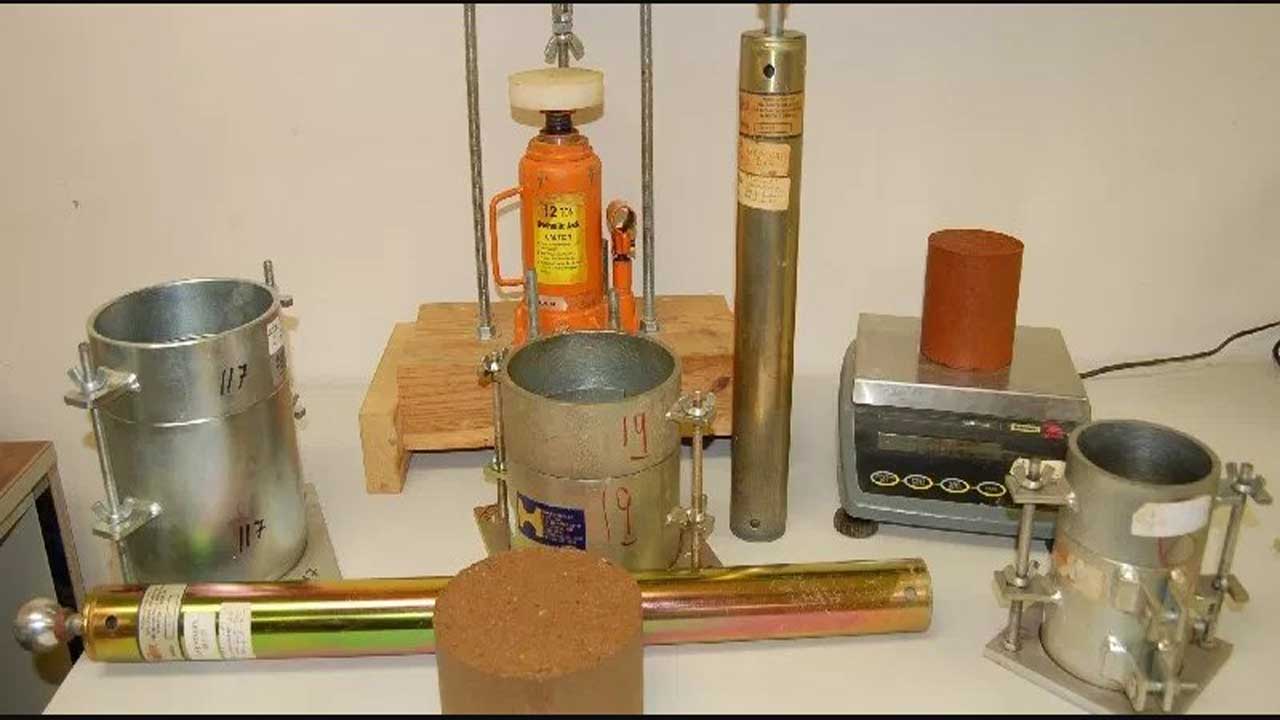 and the mold should have detachable base plate & collar of 2 inches (5.08 cm).

Sieve the soil through No: 4 sieve & reject the coarser material.

2. Take about, 3 kg of soil, add water to bring its water content to about 5% below the estimated optimum moisture content.

Then Mix it thoroughly.

3. Clean the mold, measure its diameter & height & weigh it without the collar.

4. Fit the collar & compact the moist soil in three equal layers by the rammer with evenly distributed blows to each layer. 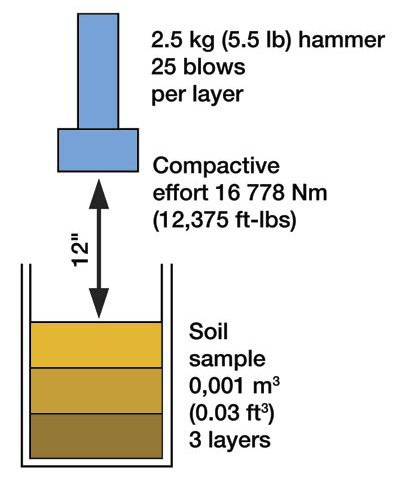 5. Remove the collar trim the compacted soil even with the top of the mold with a straight steel edge.
Clean outside of the mold & base plate & weigh it.

6. Remove the soil from the mold, split it & take about 100 grams sample for water content determination.

7. Break the soil lamps, mix it with remaining soil in the tray.

Add more water to increase the water content by 2 to 3% & repeat the compaction procedure for each increment of water until the mass of the compacted soil decreases.

9. Plot the compaction curve between water-content as abscissa & dry density as ordinate.

10. Note the water content against the peak of the curve as optimum moisture content & the corresponding dry density as maximum dry density.

The wet Density or Bulk Density of soil is computed as: r = weight of compacted soil/volume of mold.

After determination of moisture content of the soil, the Dry Density of Soil is computed as: rd = r / 1+m.

5.The Result of Soil Compaction Test. 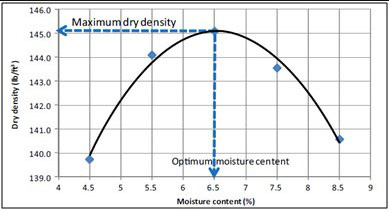 6. Q & A about Standard Proctor Test.

Thank you for Reading this article. Please, Don’t forget to share it.