Skip to content
In this article, You’ll learn the most important and essential properties of wood and timber for using it in construction.

Properties of Wood and Timber.

Color and odor, specific gravity, moisture content, grain, shrinkage and swelling, and strength are the important characters which determine the properties of wood and timber.

Most trees are characterized by a typical color and odor.

Thus, dark brown color is typical in walnuts, golden yellow is characteristic of fresh teak wood, and the creamish white color is found in softwoods like deodar.

Resinous smells are typical of pines.

Specific gravity is one of the very fundamental properties of wood and timber.

All types of wood have Specific gravity below 1.

The hardwoods have a specific gravity ranging between 0.7 to 0.9 whereas in most of the softwoods it lies below 0.7.

Hardness and strength of wood depend to a great extent on its density. Cork is the lightest wood having a specific gravity of 0.3. 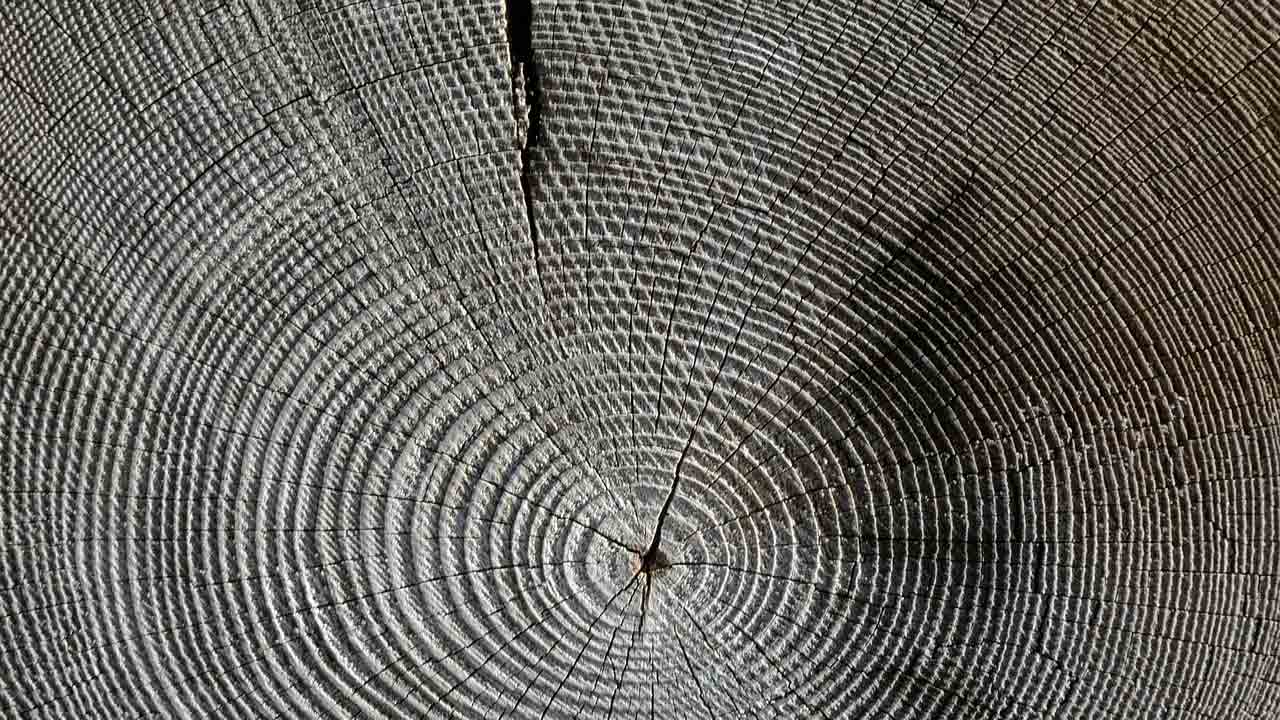 Wood is a highly hygroscopic substance.

When fully saturated in cell walls and cavities, the moisture content of wood may be as high as 200 percent in some cases.

Mostly, however, the moisture content of many trees lies between 30-50 percent.

When cutting and exposed to the atmosphere, a balance may be achieved between the moisture in the atmosphere (humidity) and the wood.

Moisture is a useless and often harmful content in timber selected for use in any form of construction.

Hence, its quantity has to be reduced to the lowest possible limits by natural (seasoning) or artificial (drying) methods.

Grain signifies arrangement and direction of fibers and vessels in the wood: parallel to the trunk, oblique to the trunk or turned and twisted with respect to the longitudinal direction of growth.

Straight-grained timber is considered best, other things being the same.

The deviation or the slope in grain from the straight alignment that may be due to disturbing conditions during the growth of the tree is considered a natural defect for construction purpose because many properties of timber are related to the grain.

Shrinkage and swelling are properties of wood related to the loss or gain of moisture by timber.

When trees are cut and laid to exposed conditions of the atmosphere.

You’ll learn in details about the Properties of Wood and Timbers here.

Properties of Timber and Wood.

Most important properties of wood and timber may be discussed under the following general headings.

Most trees are characterized by a typical color and odor.

The softwoods like deodar and pine show light (white) colors.

As regards odor (smell), quite a few kind of woods are immediately identified by their characteristic smell.

Teak kinds of wood have an aromatic smell.

The pines smell of resins.

The color and odor, however, may show variation.

Wood is a very light material, its specific gravity being always less than 1 (that of water).

It is interesting to note, however, that if the wood tissue is compacted in such a way that not even a few pores are left in it, then its specific gravity will approach 1.5 (i.e., it will become heavier than water).

Such compression is, however, not possible as a natural process.

Woods shows a good deal of variation in their Specific gravity.

Some varieties may be as light as 0.3 whereas, in other varieties of timber, the specific gravity may approach 0.9.

This depends on their structure and presence of pores in them. The heartwood is heavier than sapwood in the same tree.

Similarly, hardwoods are always denser than soft woods as a whole.

Watch the Video Below for more Information.

The natural moisture content, Mc, of wood is easily determined from the below relationship.

The cell walls and hence the cell cavities of many kinds of woods are quite easily stretched.

As such, wood may absorb moisture more than 2 to 2.5 times than its own weight.

Hence, Mc values of natural (green) wood may sometimes be as high as 250 percent.

Wood that has been lying in the air for quite some time (six months to one year) after felling, however, loses most of its moisture to the atmosphere.

The air seasoned woods can be made to lose further moisture by prolonged exposure (up to four years).

Moisture content of 12-15 percent of air-seasoned woods is considered quite safe for timber being used in any construction.

Woods can be seasoned in kilns with less than 6-7 percent moisture.

By grain, it is understood that the arrangement and direction of growth of the wood elements (tracheids, fibers, and vessels) in the wood.

In a normal wood, the tracheids and vessels (called collectively as fibers) grow parallel to the length of the tree trunk.

This type of structure is called a straight grain. The fibers may be very tightly and closely packed giving rise to a fine-grained texture in wood.

In other cases, they may be broad and quite wider (comparatively). The structure is then termed coarse-grained.

Sometimes the fibers do not grow essentially parallel to the trunk. These may be arranged in a twisted, spiral or interlocked manner.

This type of structure is called “cross-grained.”

Read More: Preservation of Timber and Wood. Its Methods, Causes.

The newly cut wood loses moisture when subject to drying naturally or artificially.

On drying, the wood undergoes a shrinkage.

Similarly, dry wood on getting rain melted or wetted may undergo considerable swelling.

It is only when the water is lost from the cell walls then the wood starts shrinking.

Conversely, when dry wood is wetted the water is first received by the cell walls.

Only when the walls become saturated, water goes to the cell cavities.

Thus, shrinkage and swelling are related to the behavior of the cell wall of the wood tissue towards the water.

It is now fairly established that:

It is for this reason that the hardwoods shrink more than the softwoods.

2. Shrinkage in the longitudinal direction is least (0.1 to 0.5 percent) whereas it is highest (7 to 15 percent) in a direction tangential to cell walls.

It is because in the latter case “full width” of the cell walls is involved. In the radial direction, it is of an intermediate order.

3. Deformation is caused by the board cut from timber due to shrinkage and swelling.

The extent of deformation will depend on the direction in which it has been cut with respect to the grain of the tree.

The most important fact about the strength of timber is that it is not the same in all directions.

This is because wood is an anisotropic material (having a different structure in different directions).

Hence, the Strength of wood is determined with reference to the direction of the grain of the wood under load.

Besides grain, many other factors also influence the strength of the timber. These are:

1. Density: Higher the density of timber, greater will be its strength.

This is because the high density of timber is a result of thicker cell walls, i.e., the greater amount of wood substance per unit volume.

This is because water in itself has no load-bearing capacity.

Its increased volume in the cell simply decreases the volume of the wood tissue.

Moreover, the higher amount of water in the cells invites many fungal and insect growths which destroy the wood tissue. They tend to reduce the strength indirectly.

3. Presence of defects: There may be some of the natural and artificial defects in timber such as cross-grain, knots, and shakes, etc. All of them cause a decrease in the strength of the timber. 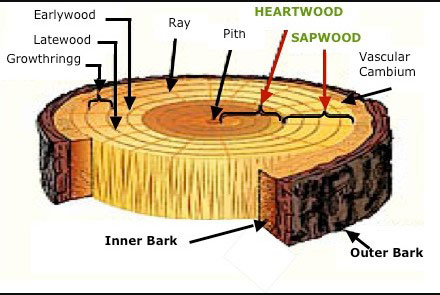 4. COMPRESSIVE STRENGTH: Timber from most of the trees is amazingly strong under compressive loads -500 kg/cm2 to 700 kg/cm2.

It is, however, to be noted that other things being same, the compressive strength parallel to grain is always less than that determined at right angles to the grain in the same type of wood.

7. TENSILE STRENGTH: Wood is very strong to tensile forces acting parallel to grain but very weak when these forces are made to act perpendicular to the grain.

Thus, the tensile strength of some woods ranges from 500-2000 kg/cm2 parallel to the grain, whereas same values lie between 10-100 kg/cm2 for the same varieties when tested perpendicular to the grain.

8. TRANSVERSE OR BENDING STRENGTH: The most important use of timber as beams is based on the fact that wood has very high bending strength. It may vary from 300 to 900 km/cm2 or more.

Thanks for Reading this Article. Please don’t forget to share it.

Defects in Timber | Its Types, Reasons.

7 thoughts on “Top 6 Properties of Wood and Timber used in Construction.”