Hey Guys, In today’s article, you are going to learn about the R.C.C and Frame Structure Building and its Construction in details.

In frame structure building construction, the walls are constructed for partition purposes only, and the load is transferred to the foundation through the beams and columns. 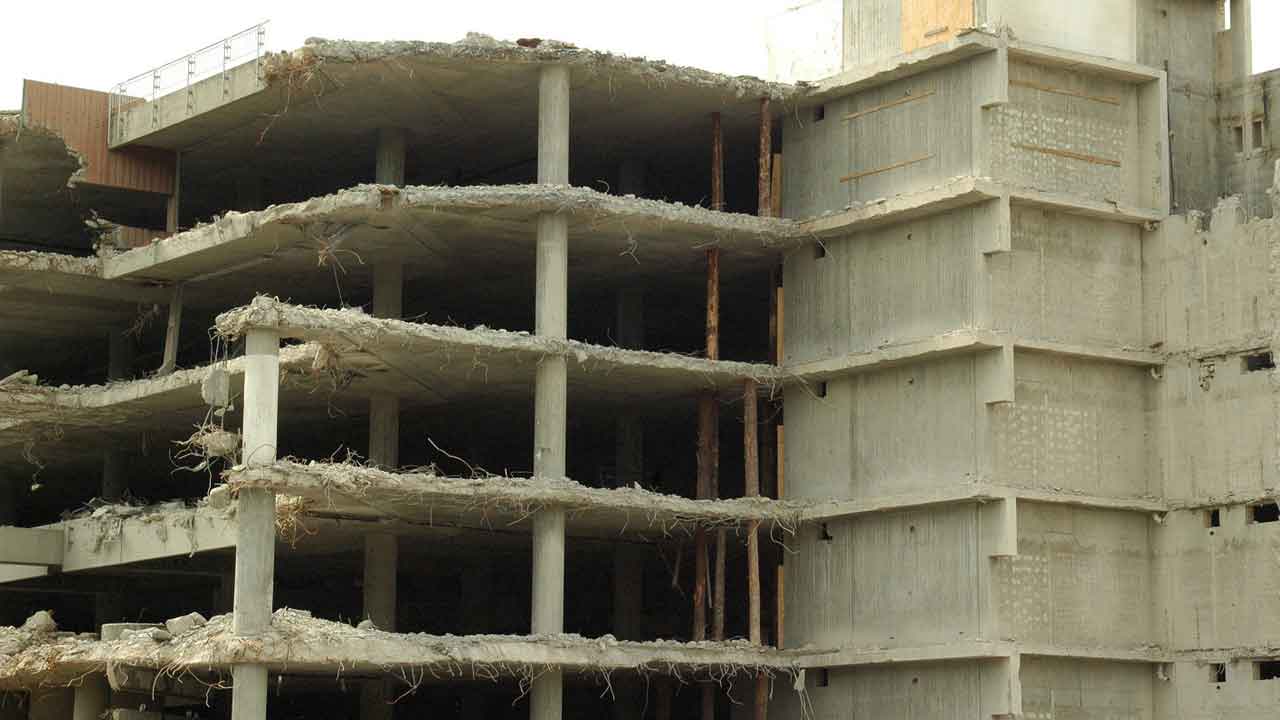 During the construction of its different structural members, reinforcement of one member is bounded with another member.

So, that all the structural members are fixed with one another.

If there is a need to provide a construction joint in frame structure building, then existing concrete is cleaned off, and joint is filled up with a new concrete mixture.

This method ensures to keep the joint rigid and monolithic. Construction of Frame Structure Building is conducted for multi-stories building.

These structural members with floor and slab are constructed monolithically.

All these members are fixed with one another, and their joints are filled up with concrete in order to make joints monolithic.

shear walls are designed towards the width of the building so that the air pressure and disturbance of earthquakes can be tolerated by the building.

Don’t forget to watch the video below for better understanding.

Plain cement concrete is very rigid in compression and weaker in tension. So, to overcome this problem steel is used in the plain concrete.

Because, as steel is strong in tension, which will also increase the property of tension in the concrete.

The ratio of cement, fine aggregate, and coarse aggregate are kept around (1:2:4), the magnitude of steel is retained between 0.8 to 8 percent in this ratio.

Different components of R.C.C Structure are explained in details below.

In Framed Structure Building, vertical structure members are called columns. The load is provided at their edges.

Columns are divided into the following types.

In an Axially Loaded Column, the load is applied over the center of the cross-section of the column.

In Eccentric Loaded Column, the load is not applied over the center.

Short Column: The column which fails by crushing of its material is known as a short column.

Intermediate Column: the column which fails by the combination of buckling and crushing.

Long Column: The column which fails by buckling rather than the crushing of material.

Slenderness Ratio is used to determine the satisfactory difference between Short and Long Column. 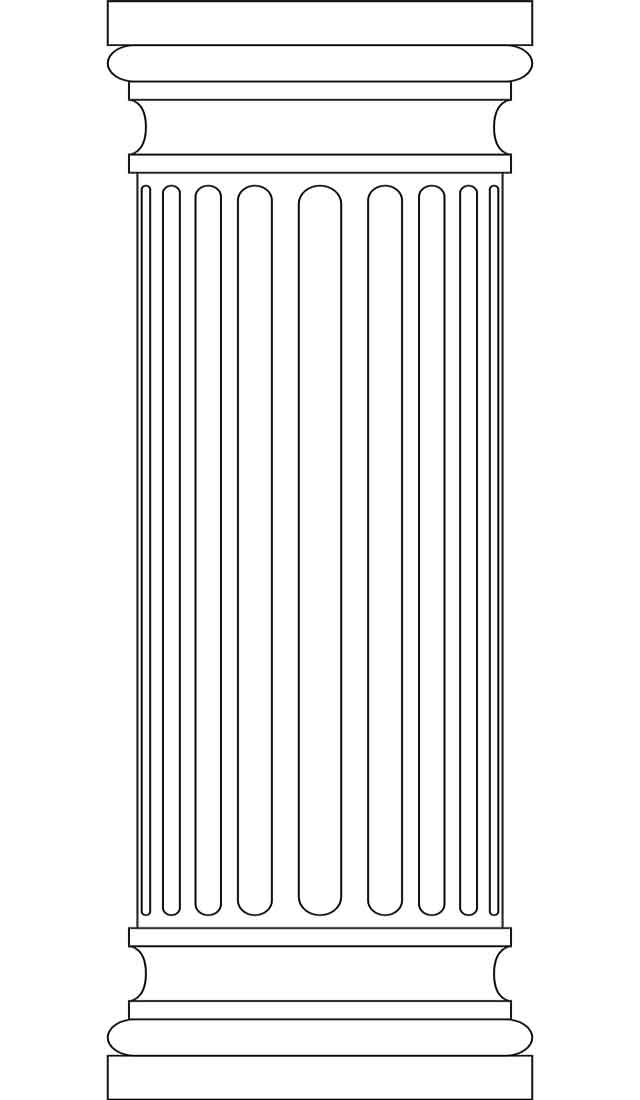 L = Length of the Column.

D = Least Dimension of the Column.

Columns are designed in many shapes including rectangular, square, and circular.

Column base is built rectangular for making a rectangular column, but It is constructed squared for all other types of columns.

The depth of the column base is kept according to the design and budget.

Description about the steel bars used in column and column base is explained below.

Main bars are used in column towards width and height.

Longitudinal bars are used vertically in the column.

In squared and rectangular shaped columns, the number of longitudinal bars is kept 4.

In circularly shaped columns, the number of longitudinal bars is kept 6.

The diameter of steel bars is held approximately 5 mm to 50 mm as per the load coming over the column.

Stirrups are rings that are set around the steel bars in some space in order to protect them from buckling.

Pitch is the distance between the centers of two rings or stirrups in a circular column. This distance is kept according to the load and structure design.

Or it will be equivalent to twelve times of the diameter of the smallest longitudinal bar used in the column.

However, measurement of the pitch is not increased more than 30 centimeters (12 inches).

In case of a circularly shaped column, continuous steel wire is covered around the steel bars instead of rings or stirrups.

This wiring is known as Helical Binding.

The pitch of helical binding should not be less than 3 times of its diameter and should not excess 1/6 of the diameter of the column.

In framed structure buildings, horizontal structural members are called beams, and they are used to withstand the load of different parts of the building.

If the beam directly transfers the load to the supports, then this type of beam is called Primary Beam.

If the beam transfers the load to another beam then the smaller beam – to which the load is transferred- will be called as Secondary Beam. 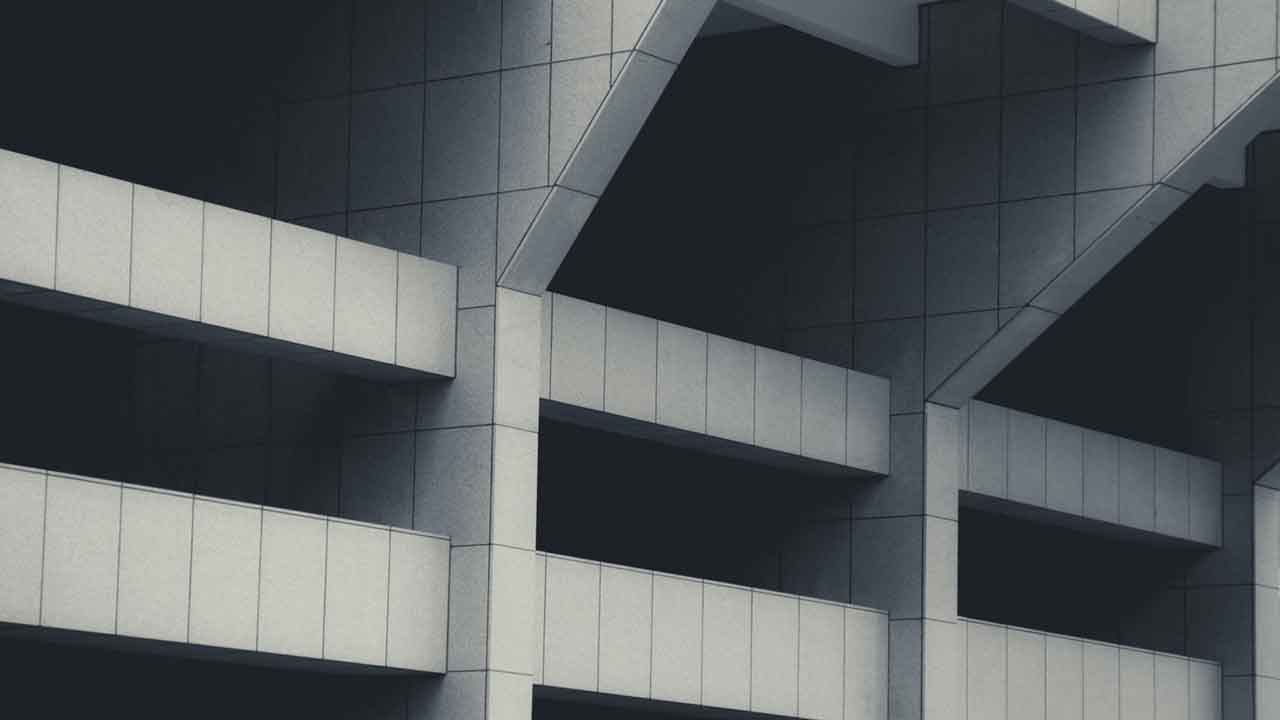 Beam has various types as follows.

A cantilever beam is anchored to one corner of the support while the other corner is left free.

Due to the tension, steel bars are used close to the upper surface in a cantilever beam.

It is that type of beam in which the one end is roller support, and the other end is pinned to the support.

In simply supported beam, the main bars are used in the lower portion of the beam.

It is like a simply supported beam. The only difference is that the ends or corners of the beam are not positioned over the vertical supports; rather they are fixed in a way that they will be overhanging.

In overhanging beam, main bars are placed in beam close to the lower portion of the beam.

Continuous beams are built on three or more supports. Their end supports may be cantilever, fixed, or freely supported.

Steel bars are designed in the same style as in overhanging or simply supported beam.

The fixed beam is constructed over the two supports, and its ends are fixed with supports. In fixed beam, main bars are placed close to the lower portion.

T-Beams looks like the English alphabet “T” that’s why they are called T-Beams. If the T-beams are built around the room, then they shape like ‘L.’

T-Beam and slab are constructed monolithically. Therefore, the width of the slab bears the load along with the rib.

Stirrups are employed to make steel bars remain at the same place and position. 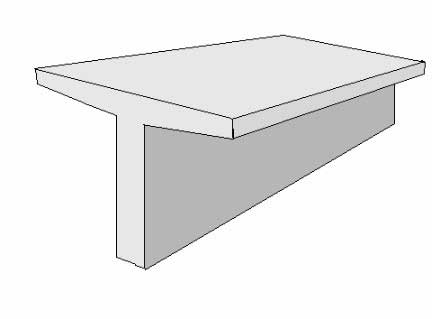 A slab is a flat horizontal place that is used for covering the building from the above and provide a shelter for the inhabitants. 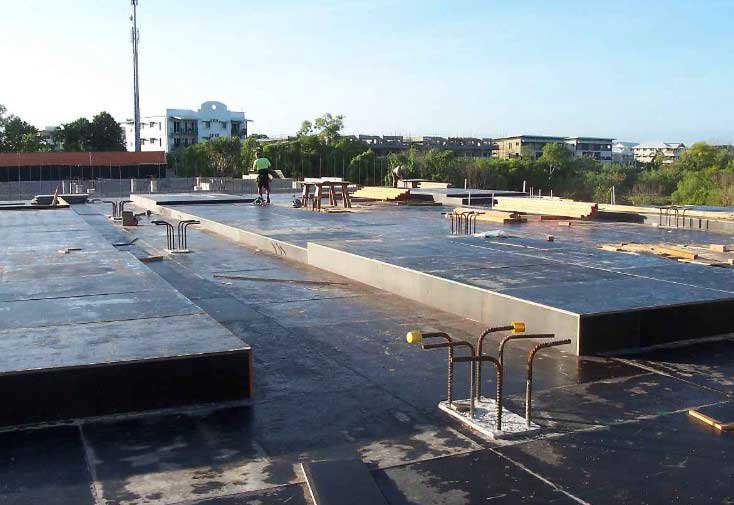 It is done to solidly establish the steel bars into concrete. Nowadays, modem type of steel bars -Deformed Steel Bars- are used that have a grooved or rough surface to increase resistance.

The hook is not required for deformed steel bars as their surface makes greater resistance with concrete and fixes solidly into the concrete.

When steel bars are Joined together to prolong them for vertical Joint, then the joint is made equivalent to 30 times length of the diameter of the steel bar.

For horizontal joint, the joint is made equivalent to 40 times length of the diameter of the steel bar.

The slab of R.C.C is divided into two major types as follows.

If the ratio of length and width of the slab is greater than 2, then it is called One Way Slab. This type of slab is supported by the beam on the two opposite sides to carry the load along in one direction.

In one way slab, the load transfer mechanism occurs in a shorter direction. 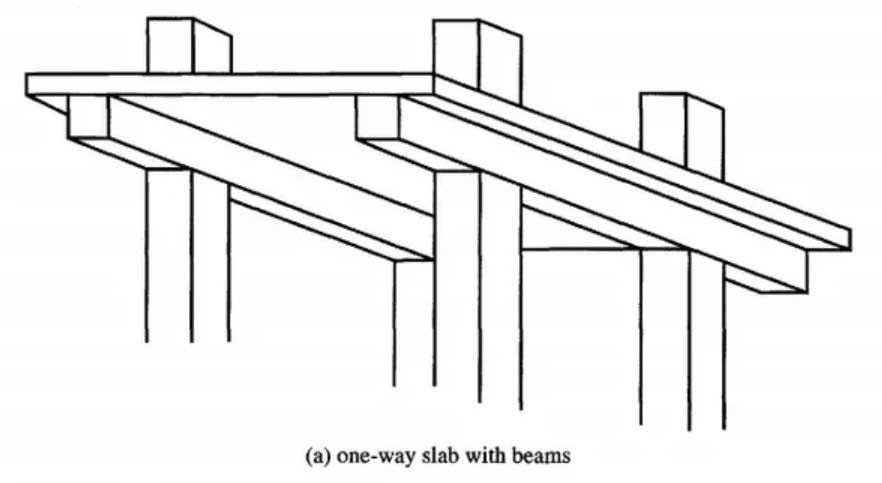 If the ratio of length and width of the slab is 2 or smaller than 2, then it is called Two Way Slab.

Main bars are used in both directions of the slab, i.e., width and length. The concrete cover is kept around 1 to 2 cm out of steel bars.

The two-way slab is supported in four directions, and the loading mechanism occurs in both direction. 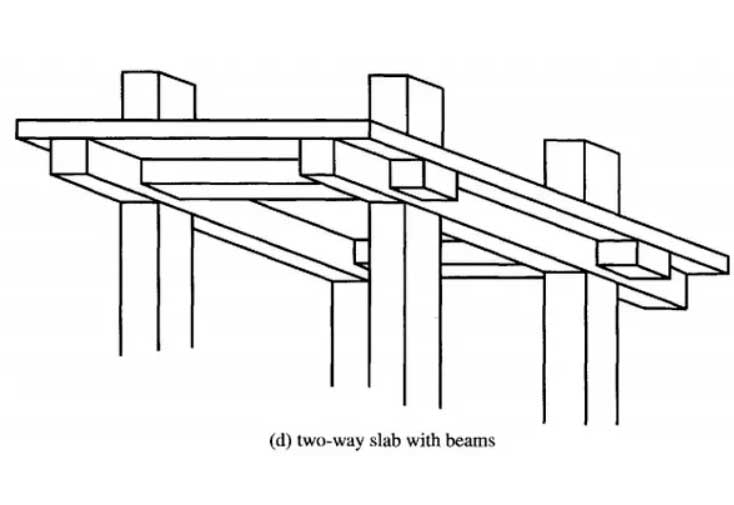 Thanks for reading this article. Please, don’t forget to share it.

Read Also: Components or Parts of a Staircase and Stair.

2 thoughts on “A Comprehensive Guide on Concrete Frame Structure Building.”