A stair is a set of steps leading from one floor to another. The room or enclosure of the building in which the stair is located is known as a staircase.

In this article, you are going to learn about the various components and parts of a staircase and stair in details.

We’ll also talk about the requirements for a good stair and principles of design of stair.

Components | Parts of a Staircase & Stair.

Staircase and Stairs are divided into different components and parts. Each stair components have their own function. We’ll discuss components, parts of a staircase and stair here. 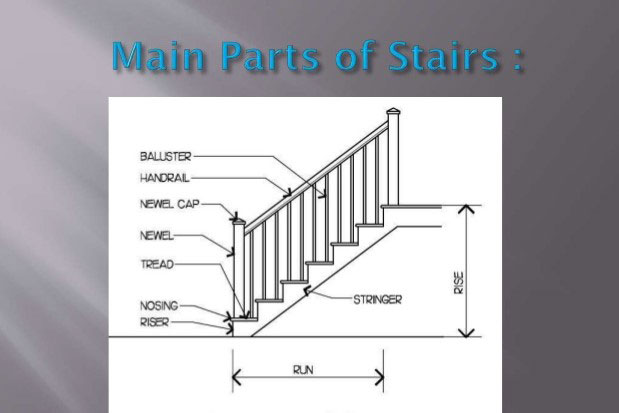 Flights is defined as an unbroken series of steps between landings.

The waist is an inclined slab which is constructed below the steps of a flight. The Load coming from the steps is transferred to the waist.

It is a horizontal platform between the two flights of a stair. A landing provides an opportunity for taking rest during the use of the stair and facilitates the change of direction.

It is a step of the stair which looks rectangular from the plain.

When the length of a stair is short, then rounding steps are made at that spot instead 0f providing landing. They are known as winders.

A step is a portion of the stair which permits ascent or descent. It is comprised of a riser and a tread. A stair is composed of a set of steps.

It is an upper horizontal portion of a step upon which the foot is placed while ascending or descending.

Going is the horizontal distance between two successive riser faces.

A Riser is the vertical portion of a step providing support to the tread.

A Rise is a vertical distance between two successive tread faces.

It is the angle of horizontal with the nosing line of a stair.

It is the underside of a stair.

It is rounded or molded member of wood or metal following generally the contour of the nosing line, and it is fixed on the top of the baluster.

The baluster is a vertical member of wood or metal, supporting the handrail.

Head Room is the minimum clear vertical distance between the tread and overhead structure, i.e., ceiling.

Nosing is the projecting part of the tread beyond the face of the riser. It is usually rounded off for architectural considerations.

These are the sloping member which support the steps in a stair. Stringer runs along the slope of the stair.

Requirements of a Good Stair.

1. Stair must be in the middle of the building.

2. Steps of stair must be of uniform shape and size.

3. The Width of stairs must be wide enough so that two people can ascend descend at a time. For this purpose, width can be around at least 85 cm.

5. The Height of headroom should not be less than 7 feet.

7. The number of steps in any series of stairs should not be more than 15 steps and less than 3 steps.

8. The material used in the stair must be rigid and durable.

9. The material used in the stair must be rough.

10. Sunlight and air ventilation must be provided in stairs.

11. Size of stairs must be designed in such a manner that no difficulty causes in ascending.

Principles of Design of Stair.

It is important to observe while designing any type of stairs that design should be simple, comfortable enough to avoid any inconvenience caused.

Despite, the design must make stairs delicate and adorable. Following principles must be ensured during the design of the stair.

1. The ratio between Tread and Riser.

3. The width of the stairs.

The width of stair must be wide enough so that two people can ascend and descend at a one time. For this purpose, width can be around at least 85 cm. Width can be increased accordingly as per the requirements.

Length of stairs should not be so much because it will be retiring to ascend such type of stairs, especially for children, aged people, and patients.

Hence, the number of steps in any series of stairs should not be more than 15 steps and less than 3 steps.

Handrail and Baluster must be made in stairs for the ease of passing. For this purpose, the height between the steps and baluster can be established around 75 to 90 centimeters.

Thanks! for reading “Components and parts of a staircase and stair.” Please, Don’t forget to share it.

2 thoughts on “Components or Parts of a Staircase and Stair. And Their Design.”