Workability and related properties of fresh concrete are essential for transport and laying. The properties which determine the quality of the hardened concrete broadly fall into the following three groups :

Characteristic strength, drying shrinkage, creep, modulus of elasticity, permeability and resistance to chemical attack are hardened and time-dependent properties of concrete that may influence structural performance.

We will discuss different properties of hardened concrete below in details.

In simple language, the strength of concrete means the maximum amount of load which it can handle.

In common practice, it is the power of the concrete which is considered its most valuable property.

In fact, high-strength concrete is synonymous with good quality concrete.

The Strength of Concrete can be determined by the compressive strength and tensile strength. 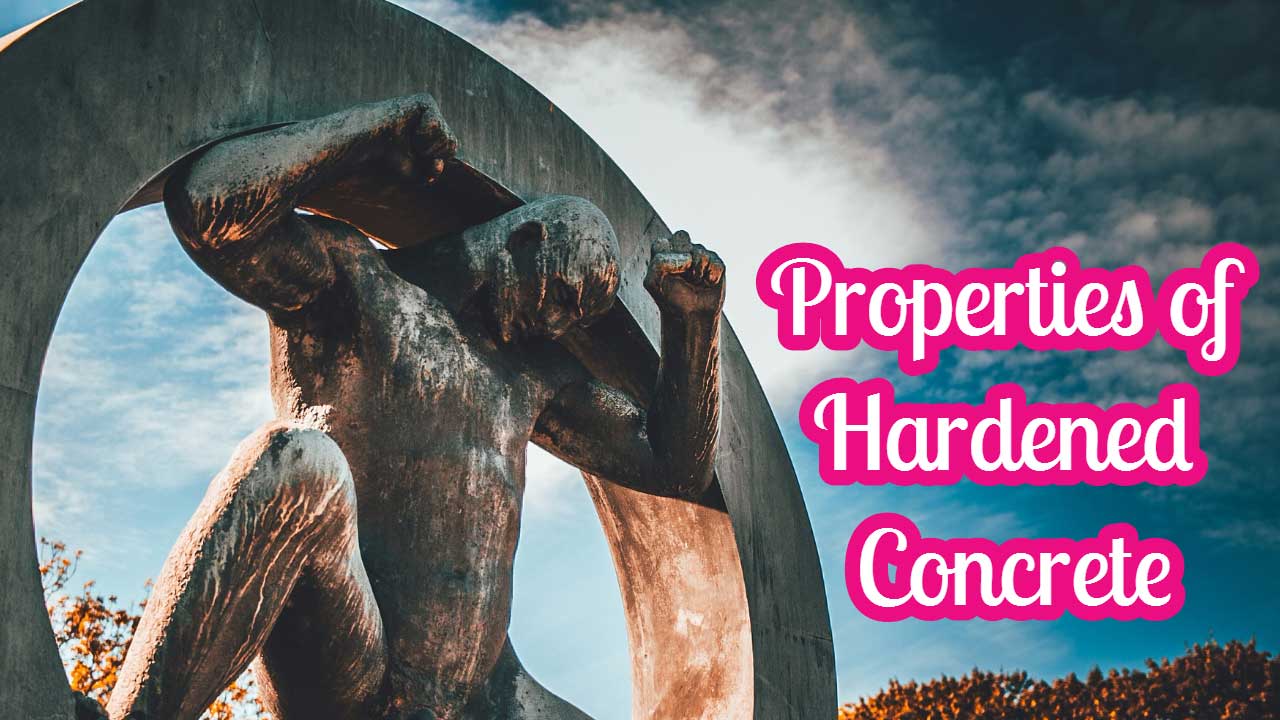 It may be defined as the maximum compressive load that can be taken by concrete per unit area.

It has been shown that with special care and control, concrete can be made to bear as high loads as 800 kg/sq.cm or even more.

In practice, however, concrete with compressive Strength between 200-500 kg/sq.cm can be easily made on the site for the common type of construction.

The compressive strength is also called the crushing strength, and it is determined by loading axially cube-shaped (or cylindrical shaped, in the USA) specimens made out of the concrete.

The tests are carried out in 3 days, 7 days and 28 days after the casting of the samples.

It has been observed that the compressive (crushing) strength of concrete is influenced by a huge number of factors.

Some of the most important factors are:

i. Type of Cement:

The composition, quality and ‘age‘ of the material which is used in the manufacture of cement that have been stored for the considerable time make concrete of lower strength.

Similarly, finer the particle size of the cement, higher is the ultimate compressive strength.

Sand and coarse aggregates form the other two essential components of concrete. A good bond between cement and the aggregates is possible only when the aggregates have sharp edges, clean surfaces, and rough texture.

Smooth and rounded aggregates result in comparatively weak bonds. Similarly, the aggregates used in the concrete making should have in themselves good compressive strength.

For example, if chalk (very soft limestone) is used in making of concrete instead of massive limestone, the resulting concrete will be weak in compressive strength because of the reduced strength of the aggregate.

Hence, when minimum water has been used just to ensure complete hydration of the cement, the resulting concrete will give maximum compressive strength on proper compaction.

Incomplete curing and intermittent drying of concrete during the curing period may cause a loss in the compressive strength to the extent of 40 percent or even more.

The cause is related to incomplete hydration of the cement in the concrete.

Certain admixtures are added to the concrete at the mixing stage for achieving some specific purposes.

It has been observed that certain admixtures especially calcium chloride, increase the compressive strength.

Some other admixtures (e.g., air entraining agents) however, affect the compressive strength adversely if proper controls are not maintained on the water-cement ratio.

Improper mixing of the concrete and careless transport and placing may result in poor (in strength) quality, despite the best cement and aggregates used in it.

It is the workmanship that determines the quality of the concrete-work in the ultimate analysis. A skilled worker can produce best concrete-mix despite some other deficiencies.

An incompetent labor, however, may spoil the entire work despite being given the best-designed concrete-mix.

The voids left in the concrete on compaction and curing have a profound influence on the strength of the concrete. 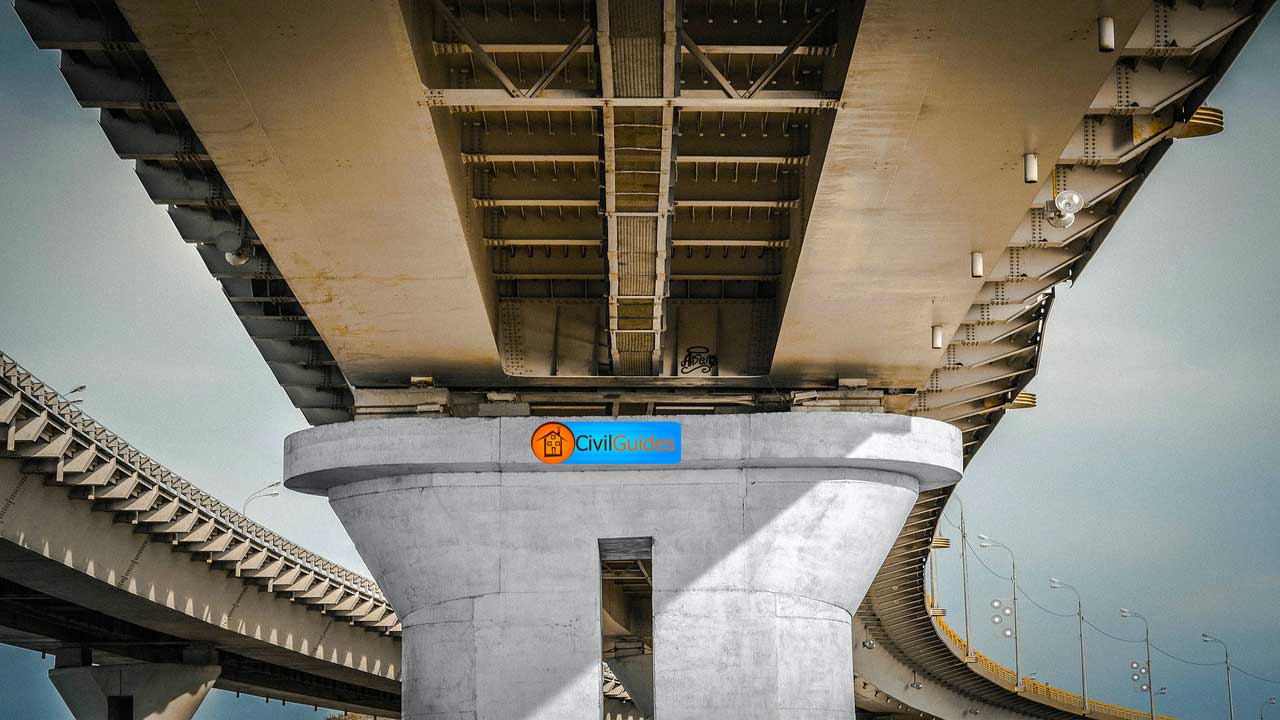 Plain concrete (without steel reinforcement) is quite weak in tensile strength which may vary from 1/8th to 1/20th of the ultimate compressive strength.

It is primarily for this reason that steel bars (reinforcement) are introduced into the concrete at the laying stage to get a block of reinforced cement concrete which is very Strong in compression as well as in tension.

In plain concrete, tensile strength depends largely on the same factors as of the compressive strength.

The Tensile strength of concrete becomes a valuable property when it is to be used in road making and runways. It is determined by using indirect methods.

In one of such methods, it is deduced from the flexural strength test. In this test, a beam of concrete is cast in standard dimensions depending upon the nominal size of the aggregate.

Then, the beam is properly cured and tested after 28 days.

In the second indirect method, called the split-cylinder method, the cylinder of specified dimensions is made to fail under tension by applying compressive load across the diameter.

This is termed as Splitting Tensile Strength.

The testing machine is adjusted to distribute the load along the entire, length of the cylinder; From the load at failure, tensile strength is calculated.

Among these forces, the following are more likely to act.

A brief note on each of these is given below.

Frost Action is a major cause of deterioration of concrete in Cold Climates. It takes place due to freezing or water within the concrete pores and cavities during extremely cold weather.

Water on freezing expands and exerts pressure on the walls of the pores. This cyclic freezing of water in the pores are responsible for the development of cracks of various nature in the concrete.

To minimize frost actions following measures should be taken.

Concrete is liable to attack to various degrees by acids alkalies and salt solutions.

The sources of these acids can be from within or outside the environment in which concrete has been used. Thus, hydrochloric acid and sulphuric acid may be present in industrial and domestic sewage.

They will destroy gradually the calcium hydroxide components of concrete used for sewage disposal. Other acids may attack the concrete used in the industrial buildings of acids.

The organic acids are common though in traces, in food processing factories and dairy farms. Concrete used in these buildings will gradually deteriorate from these acids at a fast rate.

Sodium and potassium hydroxides of cement are capable of reaction with silica.

Since amorphous silica is a common component of many coarse aggregates, such an alkali-aggregate reaction may create harmful effects on cement concrete.

This is because the gel-like silicate structures produced by the above reaction are quite weak and unstable and result in greater expansion.

These may be the cause of frequent cracking in some concrete. For avoiding this reaction, either the percentage of alkalies (K2O and Na20) has to be kept very low in the Portland Cement.

Or a great care has to be taken for selecting aggregates free of amorphous silica-like opal, chert, cristobalite, etc. 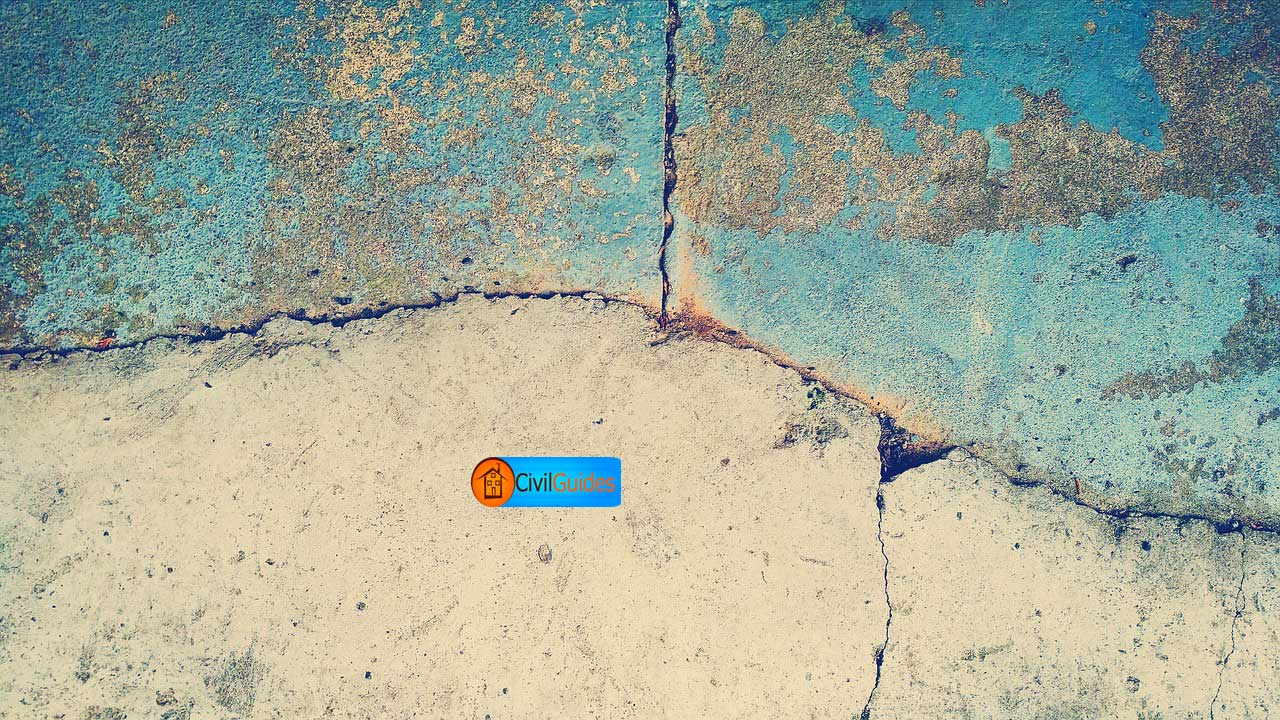 CREEP; This defines the behavior of concrete under loads.

This latter non-elastic time dependent deformation is a typical property of concrete and is commonly referred as CREEP.

Among the various causes of creep, the following may be mentioned:

It is believed that the proportion of mix and the type of cement used in concrete have a profound influence on the rate of creep.

Creep is thought to be beneficial in some cases and harmful in other cases.

In reinforced concrete, it helps in transferring stresses to the reinforcement and, thereby reducing chances of failure by stress-concentration.

Hardened Concrete undergoes in three types of shrinkage that are important with respect to its dimensional stability:

This is the shrinkage that the freshly placed concrete undergoes till it sets completely. It may also be called initial shrinkage.

Such a volumetric change is due to loss of water from the fresh concrete due to evaporation, bleeding, seepage, and soaking by formwork.

Excessive shrinkage at initial stages may develop extensive cracking in the concrete on the setting. Therefore, all precautions should be taken to avoid excessive loss of water due to evaporation.

As the concrete has completely set and hardens, some further shrinkage may result because of contraction of gel-structure due to further loss of moisture, or drying (against the term evaporation used in the first type of shrinkage).

This kind of shrinkage is practically an essential and irreversible property of concrete. It has to be met with by careful design of reinforcement to avoid its ill effects (cracking of hardened concrete).

This may be due to fall in temperature of concrete from the time it is laid till it sets completely.

Thus, when concrete laid at 30°C cools down to 15°-18°C, some shrinkage may be expected. It may be negligible on its own account.

But when added to drying shrinkage, it becomes necessary.

Concrete may expand on hardening due to the following two reasons:

Thermal Expansion: In massive concrete works, when the upper layers are laid before the lower layers have completely set, there can arise a phenomenon of thermal expansion in the lower layers.

This is because the heat of hydration gets accumulated in those layers and may attain magnitudes beyond acceptable limits.

Chemical Reactions: Alkali-aggregate reactions are known to cause a definite expansion in the concrete.

The reaction between amorphous silica of aggregates and oxides of potassium and sodium – from the cement used in aggregate yield crystalline structures of bigger volumes.

This change becomes harmful because these gel-structures are not as stable and strong as those formed by reaction between calcium oxide and silica.

They become the cause of cracking and quicker deterioration of hardened concrete.

So, These are some properties of hardened concrete. If you have any questions feel free to ask me in the below comment section.

Read More: How to Mix Concrete | Mixing Concrete by Hand and Machine.

3 thoughts on “Properties of Hardened Concrete; A Detailed Guide.”