What is Curing of Concrete?

Curing of concrete is the term used for the job of keeping the fresh concrete wet till the desired purpose is achieved.

Cement concrete has to be kept wet for several days after its placing to ensure complete setting and hardening of the cement.

Concrete derives its strength by the hydration of cement particles.

The quality of the product of hydration and consequently, the amount of gel formed depend on the extent of hydration.

Theoretically, the water-cement ratio of 0.38 is required to hydrate all the particles of the cement and to occupy the space in the gel pores.

In the field, even though the higher water-cement ratio is used, since the concrete is open to atmosphere, the water used in the concrete evaporates, and the water available in the concrete will not be sufficient for adequate hydration to take place, particularly in the top layer.

Curing can be considered as the creation of a favorable environment during the early period for uninterrupted hydration.

Objects of Curing of Concrete.

It is known that all the properties of good concrete are related to the perfect setting of cement.

It is also known that the process of setting involves complex hydration reactions which require a lot of water.

A good quantity of water is added to the concrete ingredients while making the mix.  After placing the concrete, some water from concrete may be lost due to evaporation.

Hence, the first and foremost object of curing of concrete is to provide enough quantity of water for the cement to hydrate and set completely.

Another object of curing concrete is to maintain a proper temperature in and around the concrete during the setting process.

This is because both freezing and drying temperatures hamper the process of setting of cement in a normal manner.

The third and most important object of concrete curing is to ensure a concrete of good quality, when set, strong enough to stresses, hard enough to abrasion and resistant to chemical attacks.

Such concrete is quite durable. 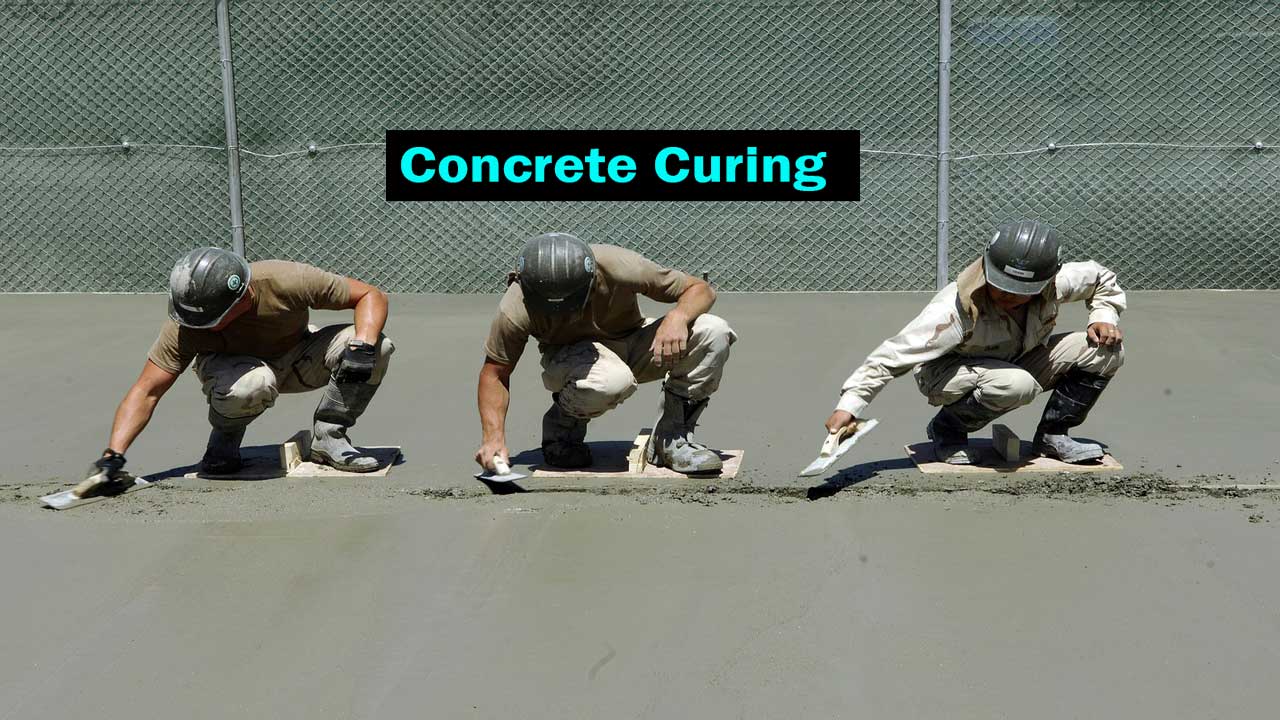 Methods of Curing of Concrete.

Different methods or procedures have been adopted for curing of concrete.

FOLLOWING ARE SOME IMPORTANT POINTS FOR SELECTING METHODS OF CONCRETE CURING.

(i) The type of construction such as those involving large horizontal surface areas as in roads, floors, and airfields, or, those involving formed concrete in walls, columns, beams, cantilevers, and arches, etc.

(ii) The place of construction, whether indoors and damp situations (as inside a building) or outdoor.

(iii) The weather conditions where concrete is being laid in cold climates or at the dry and hot weather.

Depending on the above factors, one or more of the following methods are used for curing of concrete.

Water Curing is considered as the best method of curing of concrete as it satisfies all the requirements of curing, namely; absorption of the heat of hydration, promotion of hydration, and elimination of shrinkage.

Water curing can be done in the following ways:

i. Spraying or Fogging.

i. Spraying of Water:

This method is ideally suited for almost all types of construction in most conditions. It involves spraying water with the help of house pipes connected to the main water supply lines.

Its disadvantage lies that in tall structures, water spraying at top levels may hamper work on the lower floors.

In this method, pavement slabs, roof slabs, etc., are covered under water by making small ponds.

It is the next common method of curing of concrete suited best for horizontal surface areas such as roads, floors, and slabs.

Small ponds, not more than 5 cm deep, are made over the surface by raising temporary barriers.

These ponds are kept filled with water for several days. In hot weather, ponding is the ideal method of curing of concrete.

Watch the video below for better understanding the methods of concrete curing.

In some cases, wet coverings such as wet gunny bags, jute matting, and straw are wrapped to the vertical surface for keeping the concrete wet.

For horizontal surfaces, sawdust, earth or sand are used as wet coverings to keep the concrete in a damp condition for a longer time.

It is another method of concrete curing suitable for flat surfaces and also for columnar and vertical surfaces after the formwork is removed from them.

In this method, coverings made of straw, burlap, hessian, and jute are soaked in water and placed over the concrete.

These are kept moist for the entire period of curing.

They are thought to be double-action; they prevent the evaporation from within the concrete and supply the additional water required for hydration.

The precast concrete items are usually immersed in curing tanks for a specific duration.

2. Use of Curing Compounds (Membrane Method).

This may be broadly described as the chemical method of curing of concrete.

In this method, some suitable chemical compounds dissolved in solvents are sprayed over the fresh concrete to be cured.

The solvent evaporates, leaving behind a thin film of the chemical compound spread over the concrete surface.

This film has the characteristic property that it allows little or no evaporation from the concrete.

Thus, if a sufficient quantity of water has already been added at the time of preparation of concrete, it will hydrate and set and harden satisfactorily without much additional water.

The thick film of chemical compound starts peeling off after some time (2-4 weeks) leaving behind the properly cured concrete. Most curing compounds consist of different types of resins.

A major disadvantage of this method of curing of concrete is that continuous concreting is not possible.

The cured surface will not make a firm band with the new layer or thickness unless it is completely peeled off or removed from it.

Still, on flat surfaces of single thickness, the membrane method is used extensively in concrete constructions.

The development of the strength of concrete is a function of not only time but also of temperature.

When concrete is subjected to a higher temperature, it accelerates the hydration process resulting in faster development of strength.

The exposure of concrete to higher temperature is done in the following manners:

i. Steam curing at ordinary temperature

i. Steam curing at ordinary temperature:

This method is often adopted for prefabricated concrete elements. Application of steam to in-situ-construction will be a difficult task.

For steam curing, the concrete elements are stored in a chamber. The chamber should be large enough to hold a day’s production.

The door is closed, and steam is applied.

The steam may be applied either continuously or intermittently.

Accelerated hydration takes place at this higher temperature and concrete attains the 28-day strength in about 3 days.

In large prefabricated factories, they have tunnel curing arrangements. However, concrete subjected to a higher temperature at the early period of hydration is found to lose some of the strength gained at a later stage.

It has been emphasized that very fresh concrete should not be subjected suddenly to high temperature. A certain delay period after casting the concrete is desirable.

The high-pressure steam curing is something different from ordinary steam curing, in that the curing is carried out in a closed chamber.

The super-heated steam at high temperature and high pressure is applied to the concrete. This process is also called ‘autoclaving.’

The following advantages are derived from the high-pressure steam curing process:

a. High-pressure steam cured concrete develops its strength in 1 day or less, (the strengths developed at 28 days of normally cured concrete.)

Also, it does not lose strength at a later stage.

Curing of concrete by infrared radiations has been practiced in very cold climatic regions of Russia.

It is claimed that much more rapid gain of strength can be obtained than with steam curing and does not cause a decrease in the ultimate strength as in the case of steam curing at ordinary pressure.

Another method of curing concrete, which applies mostly to very cold climatic regions, is by the use of electricity.

This method is not likely to find much use in ordinary temperatures due to economic reasons.

Normally, curing of ordinary Portland Cement concrete may take a minimum of 7 days after placement.

On average curing for 7 to 14 days gives better results in terms of achieving the objectives.

If you do curing of concrete for a longer time, there are more chances of a better strength of the structure and vice versa.

The following graph shows how the curing duration affects the compressive strength. 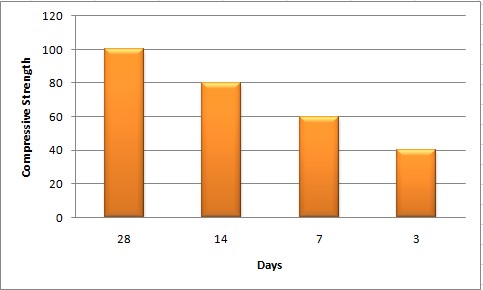 Longer periods of curing of concrete are recommended for exposed surfaces to obtain a uniform finish in the concrete work.

The Duration for curing of concrete depends on;

(4) The type of concrete grade,

What is the Right Time for Concrete Curing?

The right time of curing of concrete depends on several factors. Like, temperature, the evaporation rate, moisture content in the air, etc.

According to ACI-308, three phases of concrete curing should be done.

This process is also called Bleeding of Concrete. After placing of concrete, the water starts bleeding from concrete and rises from its pores.

After rising of water, evaporation take place, and the water starts disappearing from the surface due to evaporation.

Bleeding of concrete depends on many factors like thickness, length, temperature, etc.

So, to reduce the loss of water and prevent shrinkage, initial curing of concrete is required.

Evaporation reducers can be used for this process.

This process is done when finishing work is finished before the final setting of cement.

As you know, water plays an important role in the strength of concrete. Therefore, the intermediate curing of concrete is required.

After the final setting of concrete, it should be cured so that to prevent the loss of more water and increase the strength of concrete.

Thanks for reading this article. Please, don’t forget to share it.

2 thoughts on “Curing of Concrete – Its Methods, Time, & Requirements.”