The main object of mixing concrete (cement, sand, coarse aggregates and water) is to obtain a uniform and easily workable concrete paste.

Properly calculated quantities of the concrete ingredients are thoroughly mixed to obtain concrete of desired quality.

This mixing is done manually on water-tight platforms with the help of shovels.

For major jobs, mechanical devices called MIXERS are used which come in many designs and sizes.

The concrete mixers have rotating drums that can be tilted into one design. Internally, they are provided with blades that mix the ingredients intimately when the drums are made to rotate.

Great care is required for transporting fresh concrete till it is laid on the job.

Jerks and disturbances should be avoided as it will lead to segregation of coarse aggregates from fine particles.

The fresh concrete is generally placed in some sort of frame or formwork, of a proper design in the construction work.

The formwork should be water-tight, rigid, strong, and made wet before placing the concrete.

As far as possible concrete should be dropped vertically in the formwork. Inclined dropping will lead to segregation.

Great emphasis is laid on workmanship while laying the concrete. A bad workmanship may spoil even the best designed and mixed concrete.

This signifies relative quantities of essential components that are mixed together to make concrete. Thus a concrete mix of “1:3:5” signifies three parts of sand and five parts of coarse-aggregate for one part of cement.

The quality of concrete depends to a great extent on these relative quantities. Various methods have been applied to decide the proportions.

In ordinary construction, arbitrary method is generally applied where the experienced mason decides the ratios of sand and coarse aggregates to be mixed with each volume of cement. 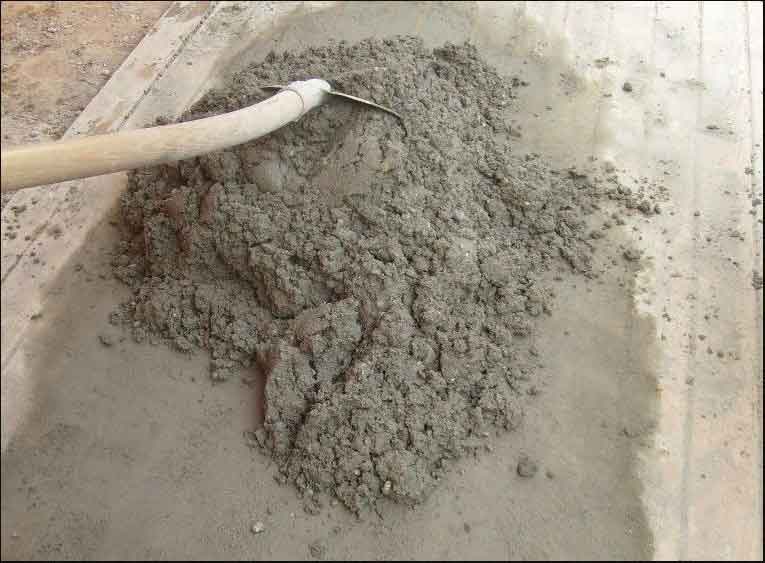 In major construction work, however, other more reliable methods have to be adopted.

The water cement ratio is an important aspect in proportioning of aggregates. It involves the determination of an exact quantity of water that should be mixed with the concrete aggregates to form concrete of desired qualities.

It had been observed that with increasing quantity of water used, the strength of concrete is adversely effected.

The Slump Test gives a measure, in a broad sense, about the workability of concrete of a given mix design.

It indicates subsidence (slump) when concrete from a conical cylinder is allowed to stand on its own. The greater the subsidence, the higher the slump and thinner is the concrete mix.

The fresh concrete is often described as dry, stiff, medium, wet and floppy depending upon the slump. The slump is also used to decide about relative proportions.

Grading of aggregates is determining the average grain size of the aggregates before they are actually used in construction. This is applied to both coarse and fine aggregates.

The basis for mixing coarse and fine aggregates of specific fineness modulus is the presence of voids or open spaces when the aggregates are packed together.

In pure coarse aggregates packing may leave 30-40 percent voids, which can be removed only by filling with finer particles. Similarly, in fine aggregates also voids are left that have to be filled with still finer particles of cement.

This is essential to obtain concrete of compact and void free character.

Read More: Cement Manufacturing Process: What is Cement made of.

Methods of Mixing of Concrete.

Mixing concrete is done either manually or with the help of machines.

This is as yet the most common method applied for common construction. In this method, a water-tight platform is made from bricks, steel or wood at a convenient distance from the actual place of Construction.

The cement and aggregates are first placed in predetermined proportions on this platform. Then, they are mixed thoroughly in the dry state using shovels.

After this, water, also in predetermined quantity is added gradually while mixing is kept continuous.

This process is continued till concrete mix of designed consistency is obtained.

Only such volumes of ingredients are mixed in a batch so that the prepared concrete is used within 30 minutes after adding water.

How to Mix Concrete by Machine.

Sometimes, for major jobs concrete mixer machine is used to mix the concrete. For major construction jobs with concrete, machine mixing is an absolutely essential method.

A concrete mixer is a device that homogeneously mix cement, aggregates, and water to form concrete.

A typical concrete mixers uses a revolving drum to mix the components.

Concrete mixers of several designs and capacities are available.

For smaller volume works, portable concrete mixers are often used so that the concrete can be made at the construction site, giving the workers much time to use the concrete before it hardens.

A simple concrete mixer essentially consists of a central drum which can be rotated about an axis.

It may be of tilting or non-tilting design. It is invariably power driven. For achieving thorough mixing, the mixer drum is provided with steel blades fixed at various angles.

Concrete mixers are of two general designs: the batch mixer and the continuous mixer.

In the batch mixer, only a small quantity of concrete is prepared at a time.

In the continuous mixer, predetermined proportions of ingredients are continuously fed from the top and volumes of concrete ready for use are available regularly.

Watch the video below for better understanding.

Precautions in Mixing Concrete by Machines.

Following precautions are necessary while mixing concrete ingredients by mixers:

After being mixed, concrete is transported to the site in such a way to prevent segregation and to keep the mix uniform.

Concrete from platforms or mixers has to be transported to the job place. There it is laid or deposited in the formwork of suitable material according to the design requirement.

The placement of a concrete is a very important operation, which largely determines the success of a structure and its durability.

Therefore, great care has to be taken in handling concrete from mixing place to the job as well as while placing it in the formwork.

Any method of transportation should protect the concrete from the effect of weather.

The coarse aggregates are most likely to segregate or separate out quickly from the mix during transport.

Hence great care must be exercised to prevent their segregation. All sorts of jerks to the transporting medium must be avoided.

Further, no water should be mixed with concrete while it is being transported. This will destroy the effect achieved by mixing the ingredients.

Careless dropping at the place of construction will also result in segregation of coarse aggregates. This must also be avoided. 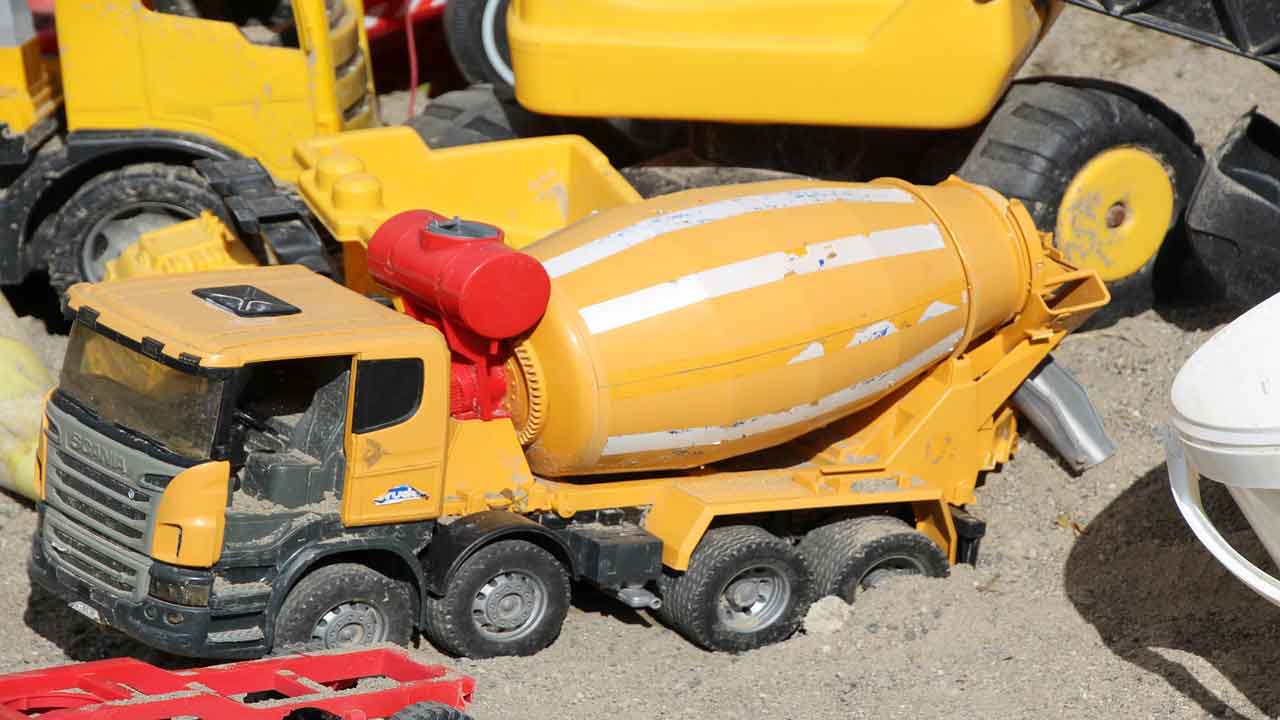 Common methods used for transporting concrete are: manual transport in iron pans; in wheelbarrows, in concrete buggies and pipelines, belt conveyors, and chutes.

Selection of a particular method is decided according to the nature of job and type of concrete mix being transported.

An experienced engineer is the best judge to take a decision in this regard.

When concrete is to be placed in a building for particular members as floors, walls, beams, columns, arches, and sills, etc., proper formwork is first made from suitable material to hold the fresh concrete.

The role of this formwork is no less important in the ultimate quality of concrete work than any other aspect of concrete making.

It is necessary that:

Don’t Forget to share (How to Mix Concrete | Mixing Concrete by Hand and Machine).

5 thoughts on “How to Mix Concrete | Mixing Concrete by Hand and Machine.”