The Setting of Cement.

The conversion of a plastic paste of cement to a non-plastic and rigid mass is known as Setting of cement.

And the time required for this process to take place is known as the setting time of cement.

This change from a plastic mass to a non-plastic mass may take any time between a few minutes to an hour or more.

The setting of cement is rather a complicated chemical phenomenon and is believed to take place in following three stages:

(i) Hydrolysis and hydration stage:

It is the first stage and starts Immediately after addition of water.

In this process the four compounds of cement (C3S, C2S, 3CA1, 4CAFe) get hydrated.

As a result complex hydro silicates are formed.

In this stage, the intricate system of hydro silicate crystals formed as above separates out in the form of a gel which gets gradually thickened and acts as glue around other particles.

Thereby initiating the setting of the cement.

During this stage, the mortar (cement-water-sand paste) becomes fully saturated and can take no more water.

In this stage, most of the components get transformed from a gel or colloidal state to a crystalline state.

The least stable colloids of tri-calcium hydro aluminate and calcium hydroxide are first to pass into a stable crystal phase.

It may be defined as the capacity of the set cement to withstand loads without disintegrating or cracking.

Thus whereas cement may require only a few minutes and hours to set, it may become sufficiently hard only after a considerable time, measured in days, weeks, months and even in years. 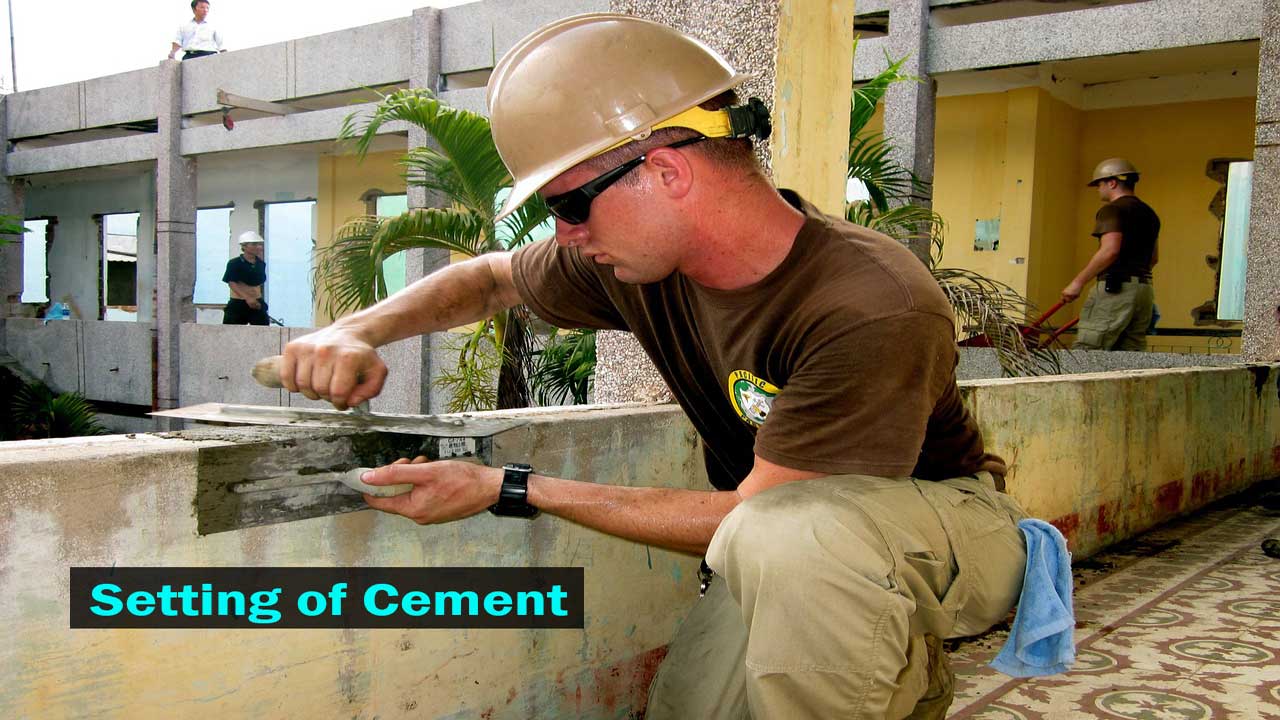 Some types of cement set quickly, within a few minutes whereas others may take comparatively longer time.

However, the initial setting time of cement is 30 minutes for ordinary portland cement.

And the final setting time of cement is 600 minutes or 10 hours on average for ordinary portland cement.

Moreover, the setting is not an abrupt process which may complete immediately after its start; it is rather a progressive phenomenon, which has a beginning, full development, and an end.

It is, on this latter basis, the setting of cement is distinguished into an initial and final setting, qualified by the time required in each case.

The time required for setting of cement is greatly influenced by the following factors:

(i) Temperature at which cement paste is allowed to set; very cold temperatures retard the time of setting.

(ii) Percentage of water mixed to the cement (water-cement ratio) in making the paste; it must be the right quantity for complete hydration and crystal formation.

Less water will result in incomplete hydration; extra-quantity will bleed out after the cement is set.

(iii) The humidity of the atmosphere in which setting is allowed to take place. It acts through temperature and moisture conditions.

It is, therefore, essential that all the mists for setting time of cement are performed at Standard conditions of temperature and humidity and on cement pastes of known consistency.

Test for Setting Time of Cement.

The Indian Bureau of Standards has specified the use of Vicat Needle for the testing setting time of cement.

(i) It consists of a frame with a movable rod with a cup.

(ii) A needle of 1 mm2  cross-section is attached to the lower end of the rod for determination of the initial setting time of cement only.

The total weight of the rod along with the needle is 300 gm.

(iii) Another needle like the above, but with hollow metallic attachment with a circular cutting edge of 5 mm in diameter and having 0.5 mm projecting end of the needle.

It is attached to the lower end of the rod when the final setting time of cement is to be determined.

(iv) A standard Vicat Mold in which the test specimen is allowed to set.

From the sample of the cement to be tested, test specimens are prepared in the following manner.

Form a paste by mixing 0.85 P water (where P denotes the percentage of water required to make a paste of normal consistency).

Note the time when the water is added to the cement with the help of a stop watch.

(ii) Fill the Vicat Mold completely with the paste so prepared under the standard conditions of temperature and humidity, (27 < 2 centigrade and at least 90% relative humidity).

Watch the video totourial of Lab testing of setting time of cement.

(i) Initial Setting Time of Cement:

Fix the specified needle (for the initial setting time of cement) with the rod.

Place the mold with the test specimen under the rod and lower the rod gently till it comes into contact with the block.

And then quickly release the rod.

Note the depth to which the needle penetrates the paste.

Repeat the experiment (of releasing the rod) till the depth of penetration is 35 mm above the base of the mold.

This means, the needle penetrates up to 35 mm and cannot penetrate the last 5 mm at the base of the mold.

When this happens. Note the time once again.

The time that has elapsed between “T1″ and “T2″ is the initial setting time for that sample of the cement.

The needle with a circular cutting edge is used for this purpose.

It is attached to the rod.

Using the same sample that has been used for finding the initial setting time, the rod with this needle is released again and again after bringing in contact with the paste in the mold.

Initially, the needle along with the cutting edge may pierce in the paste but a time would come when it fails to pierce at all.

The time is noted when the needle fails to penetrate the specimen but only makes a slight impression (and the Cutting edge does not even make that impression).

Then the time that has elapsed from T1 to T3 is the FINAL SETTING TIME OF CEMENT.

By this time the entire paste is fully set in the mold.

The setting times as laid down by Indian Standards Institution for different types of cement are;

Thanks for Reading this article. PLease, don’t forget to share it.

1. Soundness of Cement & Its Test by Le Chatelier Apparatus.