While the term formwork is generally used for all temporary works for holding concrete, etc.

The term scaffolding is generally used for the temporary structure used to support the concrete formwork or more popularly for supporting the workmen during the construction (of brickwork, plastering, and painting or renewal or repainting of structures, etc.).

It comes under safety regulations on construction sites, and standards have been prescribed for its layout and use.

For example; when a person is liable to fall from more than 2 meters height, a guardrail should be provided to a height of 1 meter and also a toe board at least 200 mm above the platform.

Scaffolding is built around the periphery of the building, and in multistory buildings, it has to be assembled to very large heights. 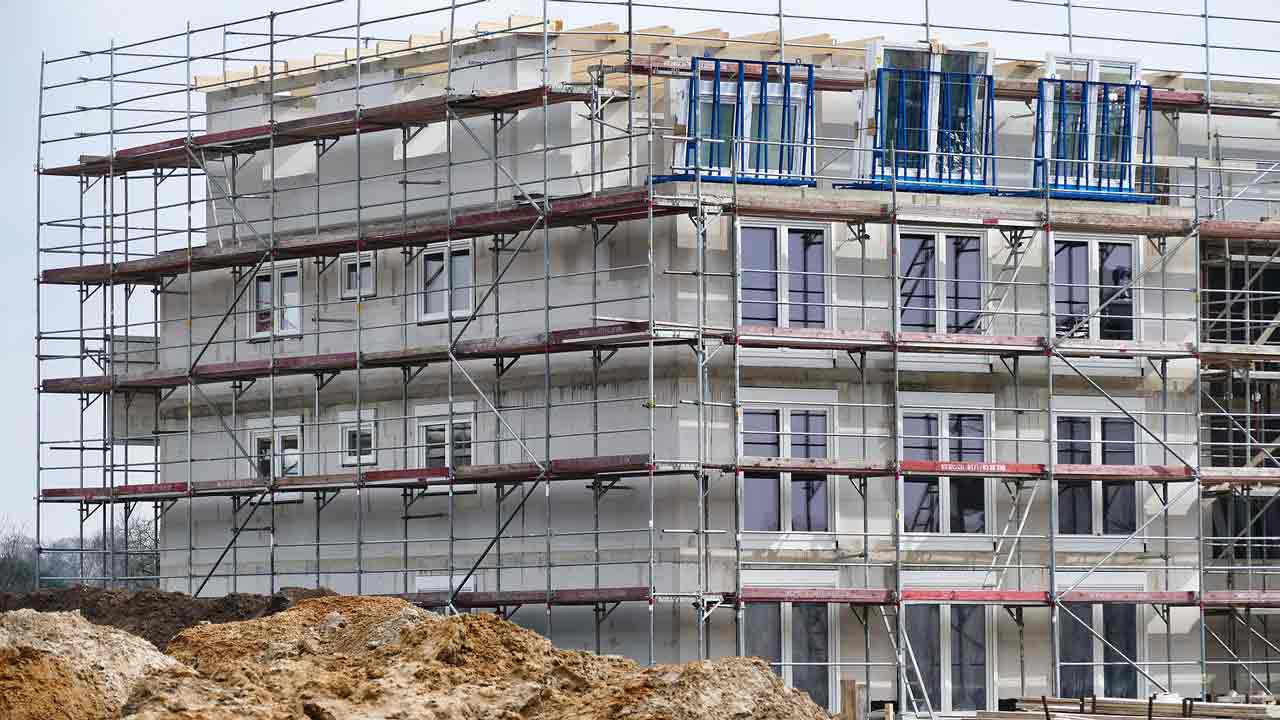 As about 35 to 40 percent of all the accidents that take place in building construction sites is due to faulty scaffolding and consequent fall of persons from heights, strict supervision should be taken in putting up of scaffolding according to standard practices.

To minimize accidents on the construction site due to faulty scaffolding, you can try hiring industry experts like Bristol scaffolding.

2. Ledgers: The horizontal members parallel to the wall.

5. Transoms: Putlogs whose both ends are supported on ledgers in double scaffolding.

7. Boarding: Planks on which workmen stand.

8. Guard rail: Rail provided at about 1 m level to guard the men working on the boarding.

9. Toe board: Boards placed parallel to boarding near the wall to give protection to workers.

10. Base plate or sole plate: Plates on the ground supporting standards. 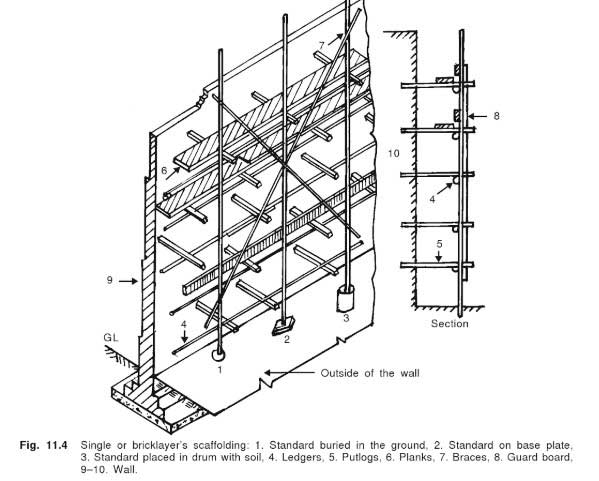 Some of the commonly types of scaffolding are described below:

This type of scaffolding is mostly used for brickwork and consists of an outer row of verticals (called standards) to which longitudinal members are tied at different levels of working (see ##Fig. 11.4).

The cross members (putlogs) are tied to the standards at the outer end and rest on the walls being built inside. The platform is carried on the putlogs.

If the putlog level coincides with an opening in the wall, it cannot be placed on the wall. Hence, it should rest on a cross piece (called bridle tube) tied at the wall end of the adjacent putlogs.

Where the verticals posts cannot be placed on base plates or in holes made in the ground, it should be suitably placed and braced for lateral stability.

A popular method in such cases is to place the vertical post in a steel barrel of 60 cm in height and of suitable diameter filled with compacted earth, as shown in ##Fig. 11.4 – above.

Read Also: What is Wellpoint System. Its Types, Installation.

This is a supporting system used by masons for plastering. It has pairs of (inner and outer) verticals. The putlogs, instead of being supported on the wall, are supported on an inner system of verticals and longitudinal’s.

To give additional lateral stability to the narrow and tall framework, it is tied to the building at intervals when used for multistory building. ##See Fig. 11.5(a) – below.

For the construction of the upper part of a tall residential building, cantilever scaffolding eliminates unwanted scaffolding at lower levels keeping the space free for vehicles, etc.

It is similar to the double scaffold, except that it is supported at the bottom by a cantilever prop. ##See Figure 11.5(b) – below.

It is used for internal work and consists of a simple cage supported on four verticals from which the workers can work.

It is movable and can be easily moved from place to place.

This is used for light work and is usually portable. It consists of two ladders with the top ends joined together by planks so that a person can work on this platform.

In tall buildings for working at high levels, such as the painting of tall buildings, it is more convenient and economical to suspend the working platform from above the ground than to support it from the ground.

This is especially so when the height is more than 30 meters.

Suspended scaffolds are of three types—fixed, operated by pulleys and operated by winches.

(Provision for stability should be provided for these when using them in places subjected to heavy wind forces).

These are the scaffolds attached to a truss or the roof truss above the site of work using ropes, chains, tubes, etc.

These are like the platforms of the window cleaners and painters of buildings.

These arc heavy platforms hung by wires from temporary outriggers and operated by external cranes.

The following are some of the important rules to be remembered in scaffolding work:

1. The uprights (standards) should not be spaced more than 1.8 m (6 ft) for heavy work such as masonry and not more than 3 m (10 ft) for light work such as painting.

2. The putlogs in single scaffolding should bear well on the wall opening. Short members nailed onto the wall should not be used as putlogs.

There should be no overhanging (or cantilevering) of these planks.

5. All scaffolding should be properly strutted so that they do not fall away from the wall laterally. Similarly, it should be stable longitudinally also.

6. Workmen should not work under the scaffolding.

7. Lorries should not be allowed to come near scaffolding.

8. Safe ladders should be provided to climb on to the scaffolding.

9. If the height is more than 2 meters, guard rails should be provided for the scaffolding.

Use of Steel Tube Scaffolding.

For ordinary low-rise buildings, it is common to use bamboo or casuarinas tied together by coir ropes for scaffolding as such works tend to be cheap.

But it should be remembered that these poles lose their strength after exposure to the sun for about six to nine months and may have to be replaced.

Watch the video below to understand more about the bamboo scaffolding.
Moreover, coir rope joints should be examined periodically for their tightness.

For large heights, for use for long periods, steel tube scaffolding or specially made wooden systems with special fixing devices are preferable.

Steel scaffolding, which is strong and can be easily joined are the best for use in multistory buildings. It will also prove to be wise as accidents are minimal in such cases.

(The term shoring is used for the work of timbering of excavations also.)

They are classified into three classes according to their positions in spare as follows:

3. Vertical (or dead) shores. They are extensively used during repair and underpinning operations.

Read Also: What is Residual Soil and Transported Soil?

The term underpinning is used to the repair, strengthening, or renewal of the foundation of an existing building.

During underpinning, the building is properly shored.

There are several methods of the underpinning of foundations of which the three popular methods are as follows.

It involves strengthening by excavation and building below the existing foundation.

It involves supporting the building on newly built piles of various types without excavations.

This is a combination of the pit and pile methods where we excavate below the foundation and build a pier for the new foundation.

Thanks! for reading this article. Please, don’t forget to share it.

9 thoughts on “What is Scaffolding? Its Types, Parts Used in Construction.”