Skip to content
In this article, you’ll learn that What is Wellpoint System, Types of Well-Point in details.

What is Wellpoint System?

A wellpoint system consists essentially of a series of closely spaced small diameter water abstraction points connected, via a manifold, to the suction side of a suitable pump.

The wellpoint technique is the pumping system most often used for modest depth excavations, especially for trenching excavations. 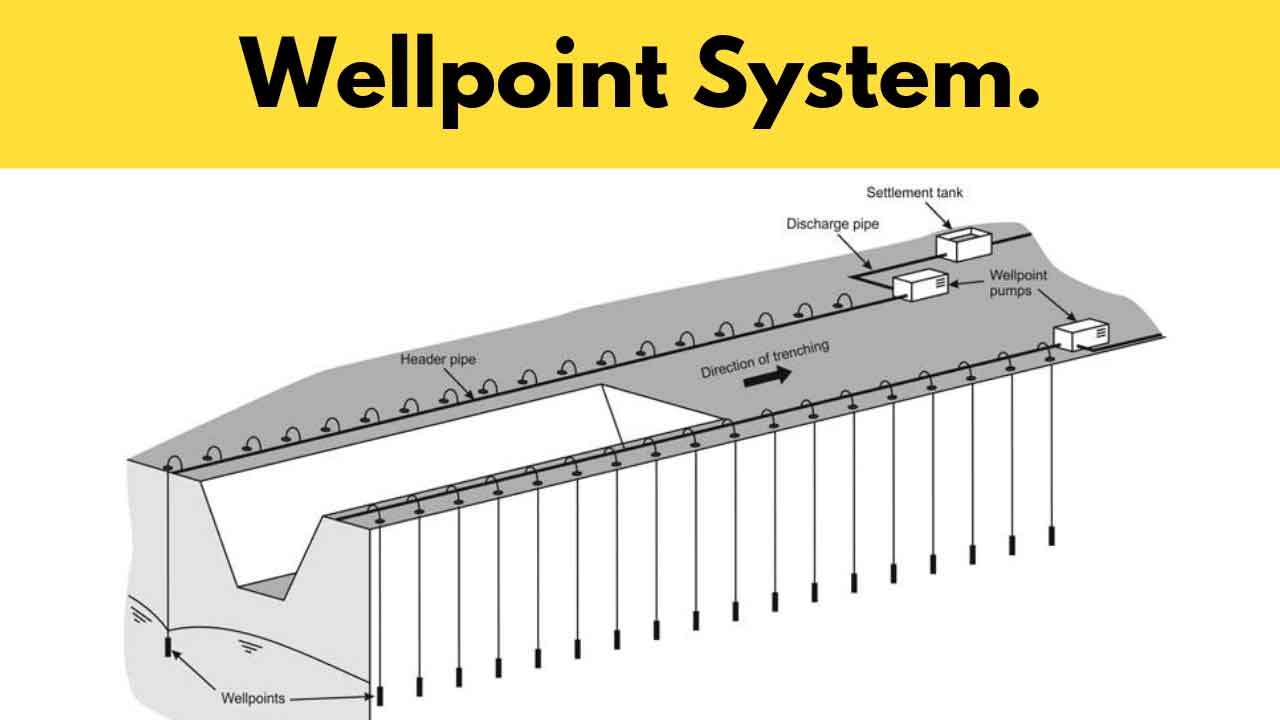 In appropriate ground conditions, a wellpoint system can be installed speedily and made operational rapidly.

The level of expertise needed to install and operate a wellpoint system is not greatly sophisticated and can be readily acquired.

However, as with any ground engineering process, having experienced personnel to plan and supervise the works can be crucial in identifying and dealing with any change in expected ground conditions.

A wellpoint is a small diameter water abstraction point (the well screen), sometimes referred to as a ‘strainer,’

(So called because of the wire mesh or other strainers of the self-jetting wellpoint) through which the groundwater passes to enter the wellpoint.

They are installed into the ground at close centers to form a line alongside, or a ring around, an excavation.

The perforated wellpoint is typically about 0.7- 1.0 meter in length and of 40-50 mm nominal diameter.

Each is secured to the bottom end of an unperforated pipe (the riser pipe) of slightly smaller diameter; 38 mm diameter pipe is commonly used.

Watch the video below for better understanding Wellpoint System.
However, where the ‘wetted’ depth is limited due to the proximity of an impermeable surface,

it is preferable that the length of the wellpoint should be shorter (usually 0.3-0.5 m) to restrict the risk of air intake at maximum draw-down.

Often it will be necessary to install wellpoints at closer centers to compensate for the lesser screened length of each short wellpoint.

Each wellpoint is connected to a header main (typically of 150 mm diameter) that is placed under vacuum by a wellpoint pump.

The header main is normally made of high impact plastic, although steel pipe is sometimes used, especially when there is a risk of damage from construction activities.

The pipe is typically supplied in 6 meters lengths and is joined on site by simple couplings.

Read Also: What is Pile Foundation? Its Types, Uses, Design.

The wellpoints are vital components of every installation.

There are two types of wellpoints:

These are known as self-jetting since they can be installed without the use of a placing tube.

The wellpoint and riser are metal and therefore are rigid, with the wellpoints connected to the bottom of the riser pipe. 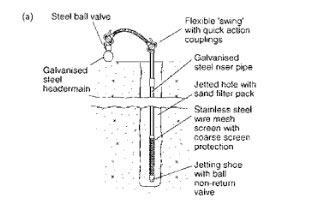 This type may be recoverable for subsequent reuse.

The wellpoint and riser are installed using high-pressure water supplied to the top of the riser pipe from a clean water jetting pump.

There is a hollow jetting shoe below the wellpoint screen.

Near the lower end of the shoe a horizontal pin is located; above the pin is a lightweight, loose fitting ball.

When the water pressure is applied to install the wellpoint, the ball is displaced downwards to allow the passage of the high-pressure water flow, but the pin retains the ball within the jetting shoe.

When the pumping starts, the applied vacuum sucks the ball up onto a shaped spherical stating and thereby seals the lower end of the wellpoint.

So, that the water from the surrounding ground can only enter through the screen section.

The unperforated riser should extend to near the lower end of the wellpoint screen to minimize the potential for air intake at maximum draw down.

While the self-jetting wellpoint can be subsequently extracted for reuse, it is not uncommon for the riser pipes to be damaged during extraction and so need straightening or even replacement before reuse.

Also, the wellpoint screens may need ‘desanding’ before being suitable for reuse.

The wellpoint and riser is usually of plastic materials and therefore inert to corrosion.

They are installed by means of a placing tube or hole puncher using similar high-pressure water jetting techniques for installation as for the self-jetting wellpoint. 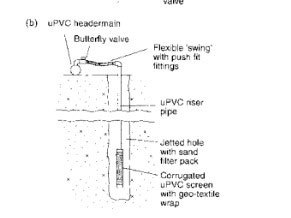 While manufactured plastic wellpoints have been marketed for some time,

The latter forms a good filter and in conjunction with the normal sanding-in is very effective, even in difficult silty soils.

As with the self-jetting wellpoint, the riser (typically made of uPVC ducting) should extend to near the bottom of the screened length.

The bottom end of the disposable wellpoint is sealed.

Generally, the riser pipe is a nominal 6 m long, but it can be longer.

The disposable wellpoints are not recoverable, but some of the plastic riser pipes can sometimes be recovered for future reuse.

The disposable wellpoint is very appropriate to use for long duration pumping duty.

The jetting pump most commonly used, supplies water via the jetting hoses at a rate of about 20 L/s and at a pressure of 6-8 bar.

There are other more powerful jetting pumps and hoses that are often used for the hole puncher, pile jetting, and other similar heavy duty uses.

The procurement of an adequate supply of jetting water for installation must be resolved for each site.

A continuous supply of clean water for jeting is essential for an efficient placing of all types of wellpoints, whichever installation technique is used.

If the source of jetting water is restricted, consideration must be given to obtaining water by pumping from the first few wellpoints as each is installed.

Generally, the volume of jetting water required for installation per well-point with 6 m long riser will be of the order of 1-1.5 m3 but will depend greatly on soil conditions.

However, it can be in the range of 0.5-35 m3, the later figure being applicable to jetting in very permeable river gravel.

Jetting in compact sands and gravels, and especially in open gravel, may be difficult and slow.

Mainly because the displaced or slurried soil particles tend not to be washed from the jetted hole to ground surface due to rapid dissipation of pressurized water into the open, permeable formation.

However, there is some compensation because in such permeable soils sanding-in is unlikely to be required.

The wellpoint system is very flexible.

For instance subsequent to the initial installation, extra wellpoints can be placed speedily to deal with localized trouble spots.

It is especially useful for shallow depth trench excavations where very often the pumping period is expected to be of short duration.

Thanks for Reading this Article. Please, Don’t Forget to Share it.

Read Also:
What is Residual Soil and Transported Soil?

2 thoughts on “What is Wellpoint System. Its Types, Installation.”