Tacheometric surveying is a method of angular surveying in which the horizontal distance from the instrument to the staff stations are determined from instrumental observations only.

Thus the chaining operations are eliminated.

Field Work can be completed very rapidly Tacheometry is mainly used for preparing the contour plans of areas.

As chaining is avoided, as far as possible, this method of surveying is best suited in broken and hilly areas, areas covered with stretches of water, Swamps, etc. where chaining will become very slow, tedious and inaccurate.

Even though this method is not very accurate owing to the above-mentioned advantages, it is employed in location surveys of lines of communications such as roads railways, reservoirs, etc. 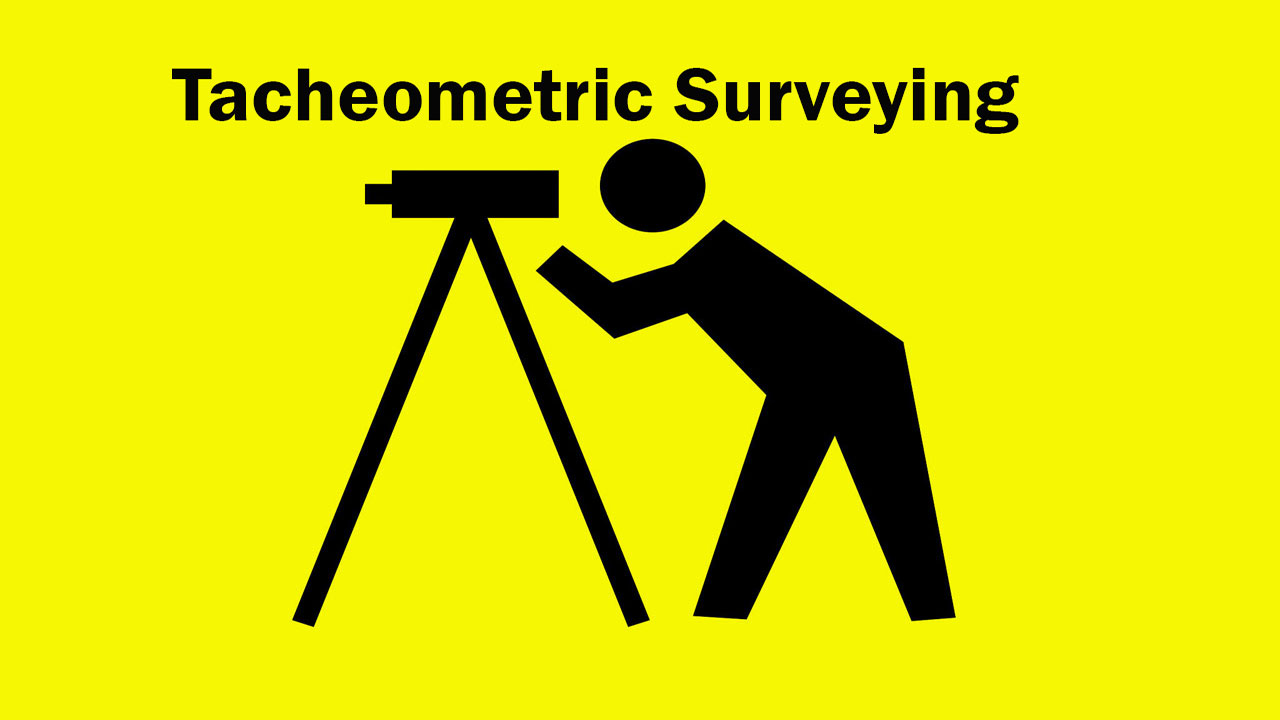 A tacheometer is similar to an ordinary transit theodolite fitted with stadia wires in addition to the central cross-hairs.

As accuracy and speed are necessary, the telescope fitted with a tacheometer must fulfill additional requirements. Also, the vertical circle should be more refined.

The telescope of the tacheometer is usually longer than that of the Ordinary theodolite and has a higher power of magnification.

The object glass is of greater diameter, and the lens system is of better quality. The magnification power should not be less than 20-25.

The effective aperture should not be less than 3.5-4.5 cm in diameter facilitating the obtaining of a bright image.

This is used for close sights. As the top and bottom hairs are read, arrangements may be provided by rack-and-pinion for the movement of the eyepiece in the vertical plane.

It should be possible to take direct readings up to an angle of 5 degrees on the vertical circle.

A Sensitive spirit level should be fixed on the “underarm.” An instrument fulfilling the above requirements is used in fixed hair method of stadia surveying.

For use in the movable hair method of stadia surveying, the above tacheometer will have a different type of diaphragm.

Generally, the fixed central cross-hair and the vertical hair are stretched in the diaphragm frame.

The movable top and bottom cross-hairs are mounted on different slides which can be moved by a micrometer screw.

The diaphragm and the slides carrying the stadia wires are located in different vertical planes to prevent wear and tear.

Micrometer screws which operate the stadia hairs are provided with milled heads and drum scales. The drums are divided into 100 parts.

Readings may be taken up to 0.001 of the pitch of the screws. This instrument is also called as a subtense theodolite.

Various methods of tacheometry survey are based on the principle that the horizontal distance between an instrument Station “A” and a staff station “B” depending on the angle subtended at point “A” by a known distance at point “B” and the vertical angle from point “B” to point “A” respectively.

This principle is used in different methods in different ways. Mainly there are two methods of tachometry survey.

In the stadia method, there are mainly two systems of surveying.

In the fixed hair method of tacheometric surveying, the instrument employed for taking observations consist of a telescope fitted with two additional horizontal cross hairs one above and the other below the central hair.

These are placed equidistant from the central hair and are called stadia hairs.

When a staff is viewed through the telescope, the stadia hairs are seen to intercept a certain length of the staff, and this varies directly with the distance between the instrument and the stations.

As the distance between the stadia hair is fixed, this method is called the “fixed hair method.”

In the movable Hair method of tacheometric surveying, the instrument used for taking observations consist of a telescope fitted with stadia hairs which can be moved and fixed at any distance from the central hair (within the limits of the diaphragm).

The staff used with this instrument consists of two targets (marks) at a fixed distance apart (say 3.4 mm).

The Stadia interval which is variable for the different positions of the staff is measured, and the horizontal distance from the instrument station to the staff station is computed.

Note: Out of the two methods mentioned above of tacheometric surveying, the “fixed hair method “is widely employed.

In this system of tacheometric surveying, two observations will be necessary from the instrument station to the staff station to determine the horizontal distance and the difference in the elevation between the line of collimation and the staff station.

The only advantage of this method is that this survey can be conducted with ordinary transit theodolite.

As the ordinary transit theodolite are cheaper than the intricate and more refined tacheometer, so, the survey will be more economical.

So, as far the reduction of field notes, distances and elevations are concerned there is not much difference between these two systems.

But this system is considered inferior to the stadia system due to the following reasons and is very seldom used nowadays.

This involves measurement of two vertical angles, and the instrument may get disturbed between the two observations.

The speed is reduced due to more number of observations and the changes in the atmospheric conditions will affect the readings considerably.

The staff used in this method is similar to the one employed in the movable hair method of stadia surveying. The distance between the targets or vanes may be 3-4 m.

(1) Set up the instrument over the station selected by the chief of the party and accurately level the instrument with reference to the altitude level.

(2) Set the vernier of the vertical circle to zero. With the altitude level at the center of its run, measure the height of the instrument (the vertical distance from the top of the peg to the center of the objective) with a measuring tape accurately.

Alternatively, the height may be found out by keeping the stadia rod first in front of the telescope and reading through the object glass.

(3) Now, orient the instrument. This is done as follows.

The reference meridian may be the magnetic meridian or the true meridian.

When the reference meridian is a magnetic meridian, set one of the vernier to zero and revolve the telescope about the vertical axis loosening the lower clamp till the compass needle points towards the north.

Then, set up the vernier to read this bearing and revolve the telescope about the outer axis until the station or the reference object is bisected.

(4) Hold the staff on the benchmark and take the bearing, read the vertical angle and the top, bottom, and axial hair readings, (the line of sight may be horizontal or inclined).

If any benchmark is not nearby the area of traversing, Fly level may be carried out from the available Bench Mark (BM), and a temporary BM may be established near the area.

(5) All the representative points under the command of the instrument station are located by taking the bearings, the vertical angles and the staff readings (to the top, bottom and the axial hairs). These observations are termed as “side shots.”

(6) After all the representative points are located from the first station, take a foresight at the second station and note down the bearings. Vertical angle and the staff readings corresponding to the top, bottom and the axial hairs.

(8) Take a back sight to the first station. Also observe the bearings, vertical angle, and the staff reading to the top, bottom and axial hairs.

(9) As each station is sighted twice two Values for the distances and elevations of the stations are obtained which should be within the permissible limits; otherwise, the work should be repeated.

Watch The Video Below for Better Understanding;

Errors and Precautions in Tacheometric Surveying:

The errors may be instrumental errors, due to manipulation and sighting or due to natural causes.

The instrumental errors may be due to imperfect permanent adjustments in the instrument and due to incorrect graduations on the stadia rod.

When the instrument is in perfect permanent adjustment before starting the work, the constants of the instrument given by the manufacturer should be verified in the field by actual observation. This is very necessary for important surveys where accuracy (and not the time) is the main criterion.

The graduations on the rod should be carefully examined, and if any discrepancy is observed, suitable corrections should be applied to the observed readings.

The errors due to manipulation and sighting depend on the efficiency and skill of the surveyor. These are due to inaccurate centering and leveling of the instrument and taking incorrect Stadia readings.

To view the stadia rod clearly, there should be no Parallax. While taking stadia hair readings, care should be taken to see that the axial hair is not mistaken for a stadia hair.

The errors due to natural causes may be due to wind, unequal expansion of the instrument parts, and visibility and unequal refraction. Out of these the last one is the most important.

This happens due to unequal refraction of rays of light When they pass through layers of air of different densities. Therefore, to avoid this error, taking readings in the mid-day should be avoided as far as possible.

Also, the lines of sight should not be within a meter from the ground.

The closing error in a tacheometry traverse should not be more than 0. l√P, where p is the perimeter of the traverse in meters.