In this article, you are going to learn in details, that what is Ferrous Metal? List and Types of Ferrous Metals; Its properties, uses, etc.

What is Ferrous Metal?

Ferrous metals are those which contain iron as their main constituent or base metal. Iron (Fe) is the principal element of Ferrous Metals.

The ferrous metals includes all the types of Iron, Steel, and their alloys. In the present, their role in the engineering industries can be easily described as “most dominating.”

In all the jobs ranging from the manufacture of a primitive type of agricultural implements to advanced types of Air Crafts, ferrous metals and their alloys occupy a prominent position.

In the automotive, building and bridge construction, railways, light, and heavy machinery, shipping, and transportation.

And in any other field of engineering activity, it may not be possible to move ahead without metals. This is explained by a number of reasons:

1. The wide abundance of Iron ore in almost all parts of the world.

2. The economic extraction of Iron from its ore.

3. The flexibility that can be induced in the mechanical properties of Iron by combining it with other metals and/or by heat treatment and such other methods.

Pig Iron is the first or basic form in which Iron is prepared as the metal from its ores.

It is, therefore, impure and crude and requires subsequent processing to develop Cast, Wrought Iron, and Steel, which are the common Ferrous Metals used in construction and industries.

Following are a few types of Pig Iron distinguished on the basis of their properties. 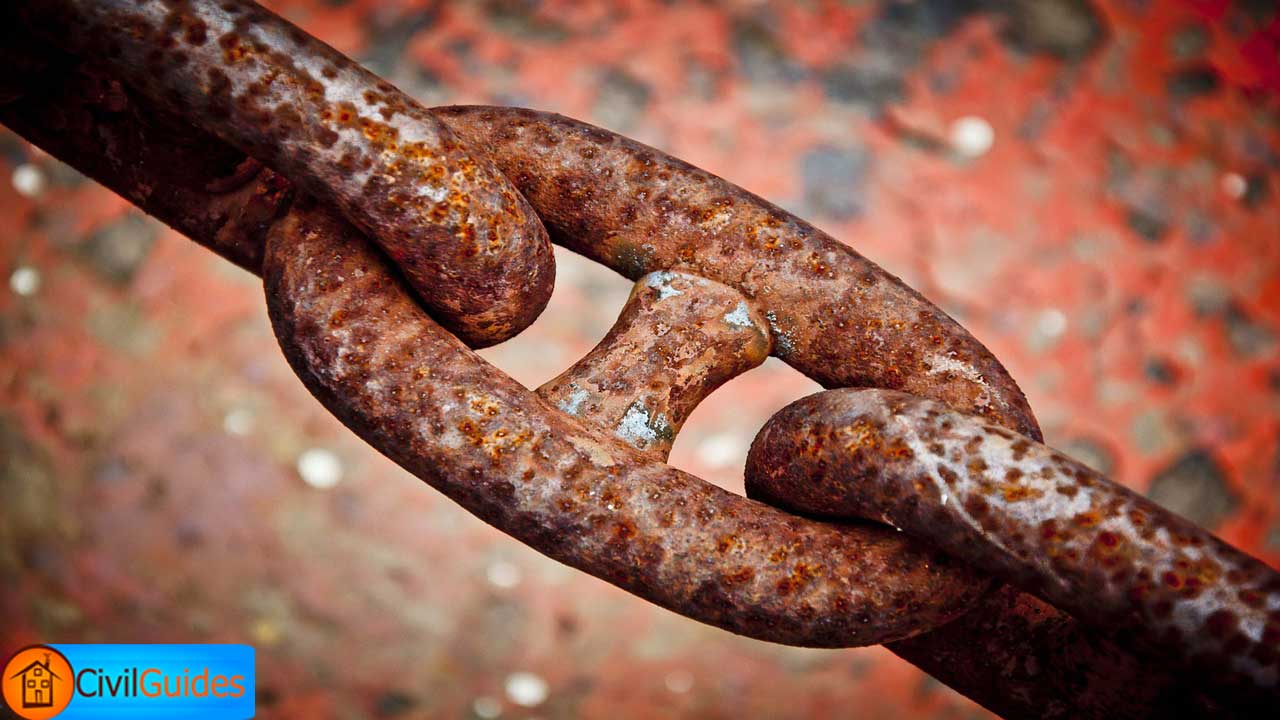 It is also called foundry pig. It is soft in character and rich in carbon. It is produced when the raw material is burnt at a very high temperature.

It is also called forge Pig Iron, as it is hard and brittle and can be converted only by using pressure. This type contains sulfur as the main impurity and hence is considered inferior in grade.

It is specially used in the manufacture of Steel in the Bessemer process, because of its freedom from sulfur and phosphorous.

Cast Iron is derived from the Pig Iron. Pig Iron, because of its impurities, is weak and hence very difficult to shape into various forms.

Therefore, Pig Iron is remolded in a furnace and cast or poured into molds of the desired shape to get the Iron known as Cast Iron.

Cast Iron is manufactured in a furnace known as cupola furnace. Cupola furnace is cylindrical in shape with an almost uniform diameter (about 1 meter) and a height of about 5 to 6 meters.

The cylinder has an inner lining of Refractory Bricks which is provided with Tuyers near the bottom for injecting the supply of air blast.

The outer shell is made of Steel. The top of the furnace remains open. The cupola furnace contains a charging door, a platform and tapping holes for the purpose of blasting the air.

The working of the furnace or manufacturing of Cast Iron is as follows:

The mixture of Pig Iron, coke, and limestone, known as a charge, is prepared in correct proportions. Coke is used as fuel and limestone as a fluxing material.

Flux is the material which easily fuses and mixes with impurities to form a slag, which can be taken through the top of the furnace.

The molten metal in almost pure form is collected at the bottom of the furnace along with the floating slag. The slag is removed intermittently through the hole and molten metal taken out through its tap hole.

The molten metal taken out are fed into the molds prepared to get desired shapes. The Iron obtained is known as Cast Iron, and the shapes obtained are called Cast Iron castings.

The Cast Iron thus obtained, has 1.7 to 4% of carbon with small impurities of manganese, phosphorus, silicon, and sulfur.

2. It can be hardened but cannot be tempered.

3. It cannot be forged, welded, or riveted.

4. It cannot be magnetized.

5. It does not rust easily.

6. It becomes soft in saltwater.

8. It is weak in tension and strong in compression.

9. It is not suitable for shock and impact loads.

11. It has good machinability property.

1. Used for water and gas pipes.

2. Used in manufacturing of cisterns, sewer and drain pipes, manhole covers and fittings.

5. Used for making parts, bodies, and beds of machines.

Following are the common types of Cast Iron used in engineering materials. 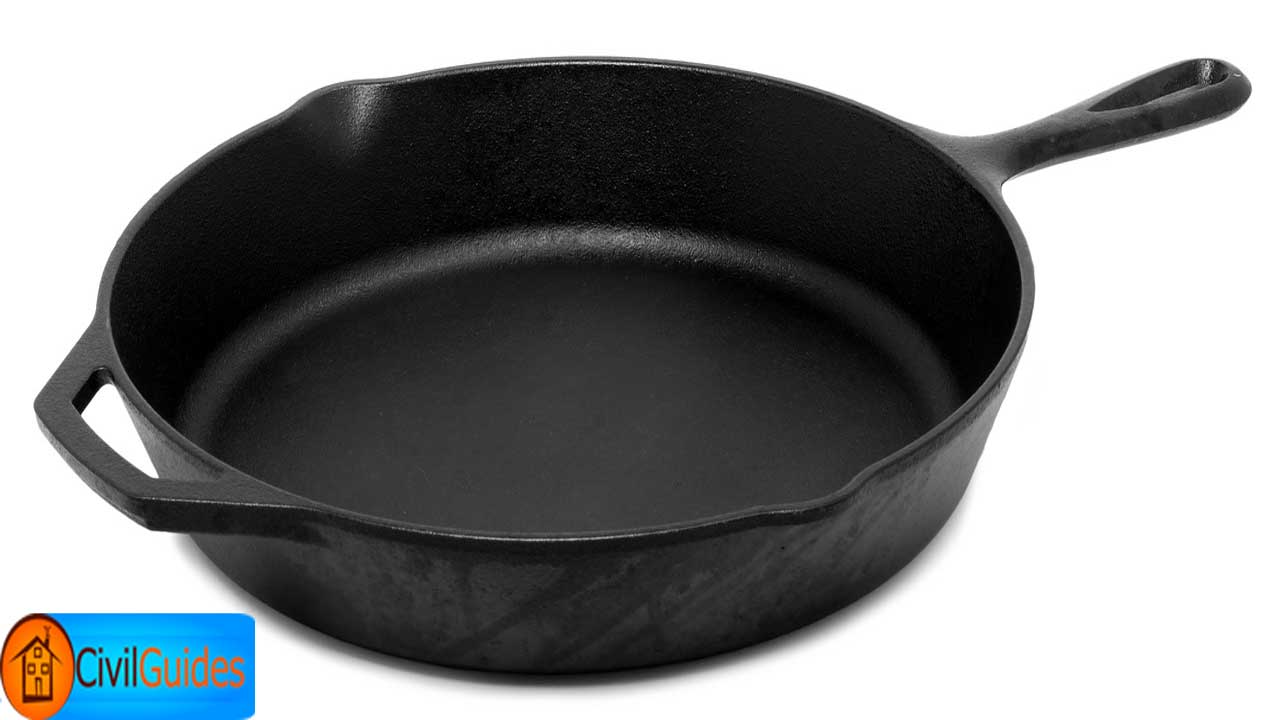 Grey Cast Iron is produced by melting the foundry Pig Iron or grey Pig Iron in the cupola furnace. It shows grey color when fractured. The grey color is due to the presence of free graphite.

The usual composition of Grey Cast Iron is:

It is soft and ductile. It is commonly used in castings, dies, molds, machine frames, and pipes, etc.

2.  It is soft compared to other Cast Irons and has good machinability.

3. It has high compressive strength.

4. It is poor in tensile strength and impact strength with almost no ductility.

1. It is used for machine tool bodies.

2. It is used for pipe and pipe fittings.

3. It is used for automobile cylinder blocks, heads, housings, etc.

4. It is used in flywheels and agricultural implements.

Read Also: What is Paint, Definition, Properties, & Components of paints.

It is white in color as there is no free graphite. In white Cast Iron, the entire carbon is in combined state. i.e., in the form of cementite, also known as Iron carbide.

White Cast Iron is produced by melting the low phosphorus Pig Iron along with the Steel scraps in a cupola furnace.

The Cast Iron thus obtained is in a molten state, and it is chilled, i.e., it is cooled rapidly. Therefore, it is also known as chilled Cast Iron.

Due to rapid cooling, its outer surface becomes harder while its interior remains softer.

It has a shiny white color and a bright metallic white luster. It is very strong, hard, and resistant to Wear and Tear. And quite brittle as well.

Its usual composition is as follows:

2. It is hardest of all Cast Irons and is wear-resistant.

4. It has high tensile strength but weak compressive strength.

5. It is not easily machinable due to its hardness, hence, require special tools for machining.

The Iron obtained is malleable as well as ductile. It possesses useful properties of both Cast Iron and mild Steels.

The tensile strength of malleable Cast Iron is higher than that of grey Cast Iron and has good machinability. 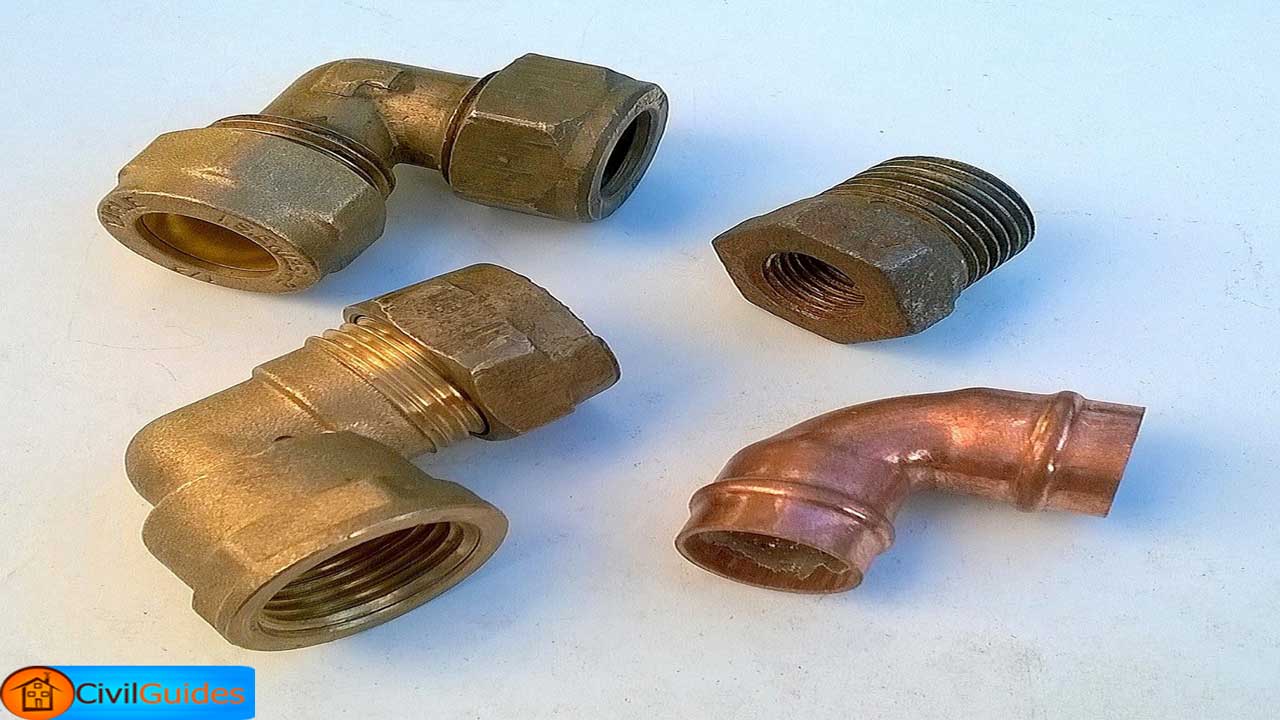 1. It is used in Automobile industries for making rear-axle housing, steering-gear housing, hubs, and pedals, etc.

2. It is used in Railways equipment of a great variety.

3. It is used in Agricultural machinery making and carpentry tools.

It is a modified Grey Cast Iron. It is also called as nodular or spheroid graphite Cast Iron or high strength Cast Iron.

Ductile Cast Iron is produced by adding any one of the elements of magnesium, calcium, cerium, bismuth, zinc, cadmium, titanium, and boron into the molten Grey Cast Iron.

Composition of ductile Cast Iron is;

1. It has high fluidity.

2. It has high tensile strength, toughness, and wear resistance.

1. It is used for castings where shock and impact loads are operating.

2. It is used in rolls for rolling mills, hydraulic cylinders, cylinder heads, etc.

The usual alloying elements are Nickel and Chromium. Nickel is added to effect an increase in the hardness and resistance to wear. Chromium makes the Cast Iron extremely tough, strong and ductile. 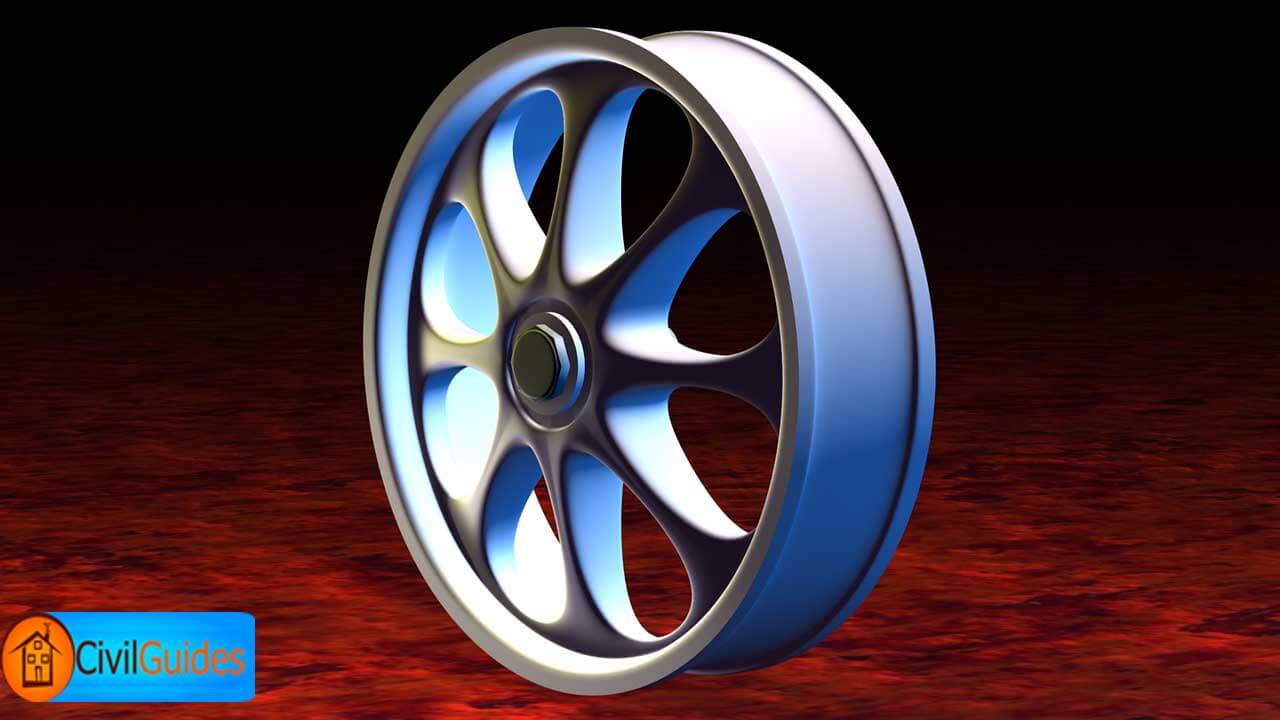 It is the purest form of Iron, containing all impurities below a limit of 0.5 percent. And carbon is included in these impurities, its proportion being generally less than 0.12 percent.

Besides, Wrought Iron always contains a small proportion of slag in the silicate component. 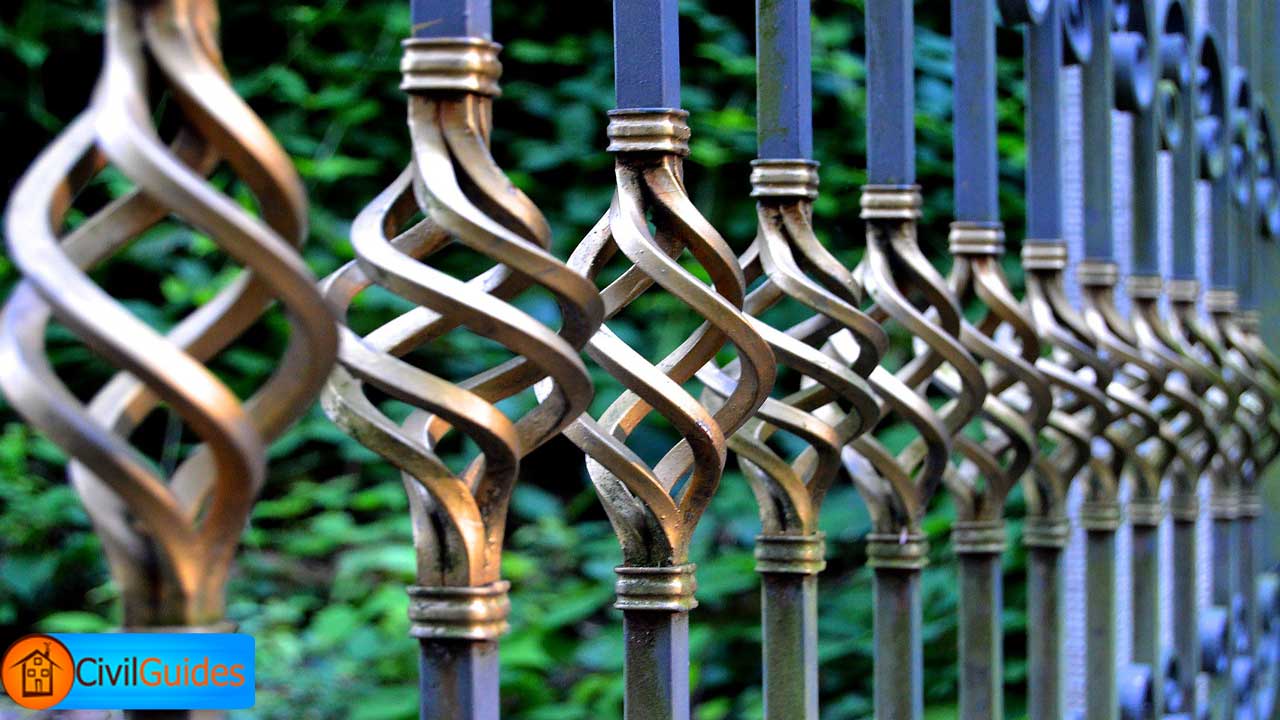 Properties and Uses of Wrought Iron:

Its most important properties are mentioned below.

Strength: It has a tensile strength varying between 2500 to 4000 kg/cm2. The strength will be greater in the longitudinal direction.

Physical: Wrought Iron is bluish in color, has a silky luster and fibrous structure. It is malleable, ductile, tough, and resistant to corrosion.

Wrought Iron shows good resistance to fatigue and sudden shock. Moreover, it can be welded with ease.

Because of the above set of properties, Wrought Iron is extensively used as a material for making plates, sheets, pipes, tubes, etc.

It is also used in buildings, railways, and marine industries.

Besides carbon, many other metals may also be present in addition to Iron, giving rise to great varieties of Steel.

On the basis of the presence of free graphite, differentiation of Steel and Cast Iron can be made. If there is a free graphite present, it is a Cast Iron, otherwise a Steel.

The hardness and toughness of Steel increase with the increase in carbon content up to 1.7%.

On the other hand, with the decrease in the carbon content (lower than 0.1%), the material would resemble more to Wrought Iron or pure Iron.

Due to these properties, Steel is used as a structural material in all types of situations.

Steel is a versatile material of modern age. Its properties can be varied over a wide range by varying its composition and by subjecting it to various mechanical and heat treatment processes.

Hence, Steel finds most of the applications for all purposes in places of Cast Iron and Wrought Iron.

The elements of the composition of Steel apart from carbon are sulfur, silicon, phosphorus, manganese, etc.

Steel is manufactured using one of the following processes: 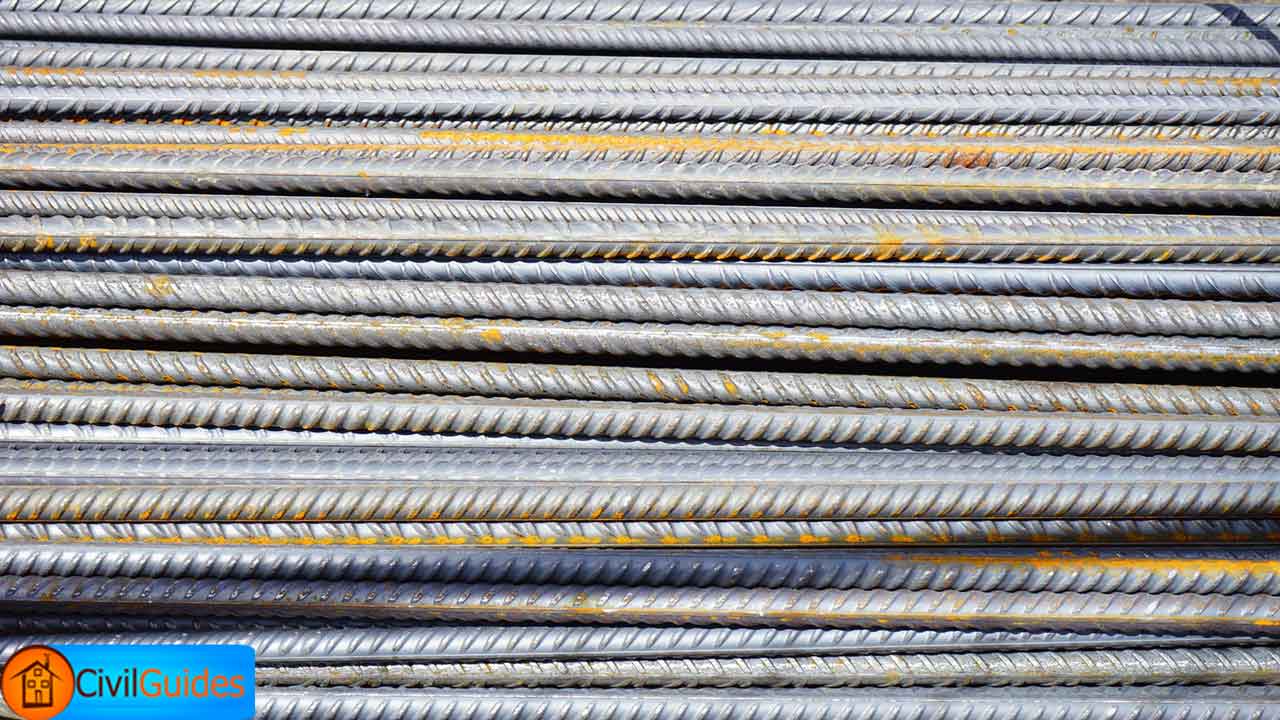 Steels can be classified in many ways such as on the basis of the methods used in their manufacture, on the carbon content, or according to their use.

It can also be classified on the basis of Steel casting.

It is, however, the classification on the basis of their chemical composition is commonly adopted. Following are the major groups of Steels.

This is the first major group of Steels. Carbon is the only controlling component in them besides Iron. They are further subdivided into 3 subcategories.

An alloy is the purposeful mixture of two or more elements of which one being in largest proportion is called as base metal, and other elements are called as alloying elements.

Thus all the Steels, in addition to Iron and carbon-containing other elements such as; nickel, chromium, manganese, silicon, vanadium, molybdenum, tungsten, sulfur, phosphorus, etc., are called as alloy Steels.

The purpose of alloying is to improve the properties of Steel, like imparting the fine grain size, to improve the hardness, toughness, strength, corrosion resistance, etc.

These are Steels made with the addition of a definite proportion of a selected element or elements in addition to carbon at the manufacturing stage.

They can be sub-divided into 2 types on the basis of the proportion of alloying elements, which are the following:

So, finally, Ferrous Metals List comes to an end. If you have any questions, feel free to ask in the comment section. Please, don’t forget to share it.