The field density test of soil is conducted in the field to know whether the specified compaction is achieved or not. Normally Sand Replacement Method is adopted for this purpose.

The apparatus used in this field density test consists of a sand pouring cylinder, with pouring cone at its base.

There is a shutter between the cylinder and the cone. The cylinder is first calibrated to determine the unit Weight of sand.

For good results, the sand used should be uniform, dry and clean passing a 1.0 mm sieve and retained on a 600-micron sieve.

1. Sand cone apparatus, filled with uniformly graded sand passing through No. 20 sieve and retained on No. 30 sieve.

2. Density Plate, with a central circular hole of diameter equal to the diameter of pouring cone. 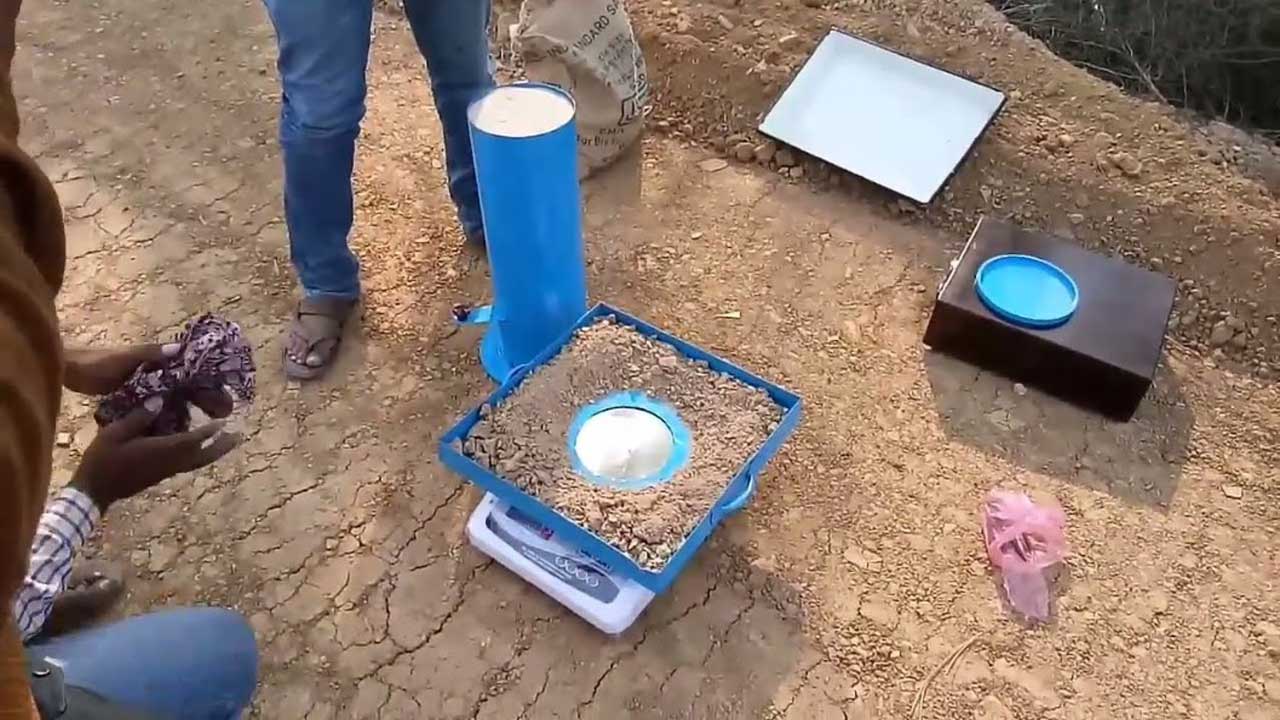 (a) Calibration of Apparatus.

The cylinder is filled with sand weighed. A calibrating container is placed below the pouring cylinder, and the shutter is opened.

The sand fills the calibrating container and the cone.

The weight of the sand in the container and the cone is equal to the difference between the two observations.

The pouring cylinder is again filled to the initial weight.

The sand is allowed to run out of the cylinder, equal to the volume of the container and the shutter is closed.

The cylinder is then placed over a plain surface, and the shutter is opened, the sand runs out of the of the cylinder and fills the cone.

The shutter is closed when no further movement of sand takes place. The cylinder is removed and the sand formerly filling the cone is collected and weighed.

The unit weight of the sand is determined as under:

w3 = weight of cylinder after pouring sand into the cone and the container.

Vc= Volume of the container.

(b) Measurement of volume of the hole.

A tray with a central hole is placed on the prepared ground surface which had been cleaned and properly leveled.

A hole about 100 mm diameter and 150 mm deep is excavated in the ground, using the hole in the tray as a pattern.

The soil removed, is carefully collected and weighed (w).

The sand pouring cylinder is placed over the excavated hole. The shutter is opened, and the sand is filled in the cone and the hole.

When the sand stops running out, the shutter is closed. The cylinder is removed and weighed.

w1 = weight of cylinder and sand before pouring into the hole.

w3= weight of cylinder after pouring sand into the hole.

γs= unit weight of sand, as found from calibration.

The bulk unit in-situ soil is determined from the weight of soil excavated and the volume of the hole.

The Wet density or bulk density of soil is computed as:

After determining the water content (mc) of soil, the dry density of soil is computed as:

1. Calibration of cone apparatus should be done firstly:

4. Dig out soil 4” to 6″ deep with the same diameter as the density plate hole. Clean all loose soil out of the test hole with brush and spoon.

5. Collect all the excavated soil and weigh it.

6. Invert the sand cone apparatus over the density plate and open the valve to tilt the hole with sand. When the sand stops flowing, close the valve and remove the apparatus from the test hole.

8. Collect as much of the sand from the hole as possible.

9. Put a sample of the excavated soil in the weighed moisture container and place it in the oven for water content determination.

1. Sand used in this test should be dry.

2. Excavated soil should be collected as the whole.

3. Sample collected for determination of water content should be kept covered.

4. Calibration of cone apparatus should be done before starting the test.

Q & A about Sand Replacement Method.

Q.3: What are the specifications of Sand used in Sand Replacement Method Test?
Ans: It should be clean, dry, and uniform.

Q.5: Give the formula used to determine dry density while bulk density and moisture contents are known:
Ans: γd = γ/1+m.

Thanks for Reading! “Field Density Test of Soil by Sand Replacement Method.” Don’t Forget to Share it.