Sieve analysis of soil is a simple operation of dividing a sample of aggregate into fractions, each consisting of particles of the same size.

In practice, each fraction contains particles between definite limits, these being the openings of standard test sieves.

Before sieving, the soil should be air dried in order to avoid lumps of fine particles and also to prevent clogging of the finer sieves.

Sieves should also be cleaned before use.

The actual sieving operation can be done by hand or as in modern laboratories by a sieve shaker.

Grading curves with the ordinates representing cumulative percentage passing and the abscissa the sieve opening to logarithmic scale can be drawn to study the results of sieve analysis of soil.

By using these curves, it is possible to see whether the grading of a given sample conforms to that specified or is too course or too fine, or deficient in a particular size.

A sieve consists of a metal ring, usually made of brass, whose dimensions are typically 2 inches Deep and 8 inches Diameter (Also available in 12 inches and 18 inches diameters), with a wire mesh or screen on the bottom.

The sieve is given a number that corresponds to the number of openings per linear inch of the screen:

For example, the U.S. Bureau of Standards No.4 sieve has four 0.187 inch openings per inch.

(The reason the openings in a No.4 Sieve are not 1/4 inch in size is that the 1-inch linear measurement also includes the diameter of the standards (thread) that comprise the mesh).

The stack sieves are called a nest of sieves.

A lid is placed on top of the nest, and a pan is placed below the bottom sieve to catch any soil that passes through the smallest openings.

Care should be exercised when removing a sieve from the nest.

Often the sieves fit tightly, and a sudden, unexpected dis-engagement could result in the contents being spilled from the sieve.

Additionally, a principally horizontal shaking motion should be used instead of mostly a vertical motion.

This motion has been found to be more efficient, and it also results in less loss during the test procedure.

A 10-minute shaking period is suggested in Sieve analysis of soil procedure.

Similarly, a sample comprising primarily of fine-grained material will require a longer shaking period than a coarse-grained sample of equal weight.

Nodules of lumps of soil must be broken down into their individual particles in order for the grain size analysis to be valid.

This is accomplished in two ways.

The second is to “wet sieve” the soil. Washing the particles that are retained on the No. 200 sieve with water accomplished two things.

1. It separates those small lumps that might not have been broken up with the rubber-tipped pestle into the individual particles.

2. It washes the “Dust sized” particles of the larger particles end through the No. 200 sieve.

Particles stuck in the sieve screen:

Particles that appear to be stuck in the sieve screen should never be forced on through the mesh.

There are two reasons for not doing this:

1. The particles would have passed through the screen on their own, had they been smaller than the mesh opening.

Forcing these particles through the screen to be retained on the next size would distort the again size results.

2. Secondly forcing the particles through the mesh can damage the screen and necessitate its replacement.

How to remove the particles:

Particles caught in a screen should be removed by brushing with the proper sieve brush wire.

Brushing should be done from the underside of the screen in order that the particles can be brushed out of screen in the direction from which it entered the screen opening.

Stubborn particles that cannot be removed by brushing should be left in place rather than forced out.

The number or sizes of sieves used in the nest depends on the type of soil and the distribution of the particle sizes. (Generally sieve No.4, 10, 40, 100, 200) are used for classifying the soil.

Fineness modulus is a single factor computed from the sieve analysis and is defined as the sum of the cumulative percentages retained on the sieve of the standard series divided by 100.

The fineness modulus can be looked upon as a weighted average size or a sieve on which the material is retained, and the sieves being counted from the finest.

Thus a fineness modulus of 6.00 can be interpreted to mean that the sixth sieve, 4.75 mm is the average size.

The fineness modulus cannot represent the particle size distribution, but it is useful for measuring slight variations in the aggregate from the same source, i.e., as a day to day check.

Based on the practical experience, the fineness modulus of fine aggregate should be between 2 to 3.5 and of coarse aggregate between 3.5 to 8.

Usually, the Fineness modulus is calculated for fine aggregate rather than for coarse aggregate. 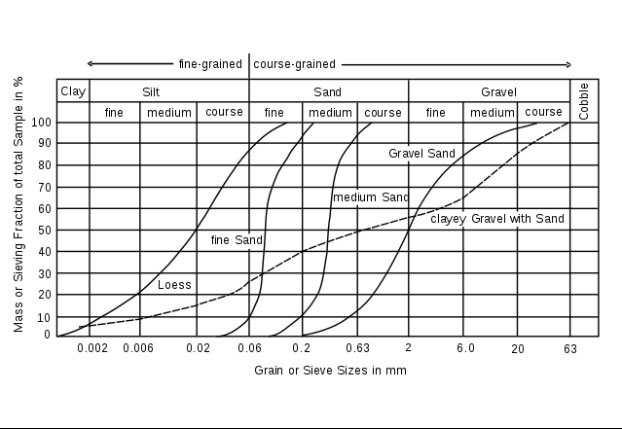 2. Mortar and pestle or a mechanical soil pulverizer.

1. Obtain the soil sample which has already been pulverized or washed by placing it on sieve No. 200 and then dry it in an oven.

3. Place the stack of sieves in the mechanical sieves shaker and sieve for 5 to 10 minutes.

Note that if the entire stack of sieves does not fit into the shaker, perform a hand shaking operation until the top few sieves can be removed from the stack and then place the remained of the stack in the mechanical shaker.

4. Remove the nest of sieves from the shaker and obtain the weight of material retained on each sieve.
Sum these weights and compare with the actual weight taken.
A loss of more than 2 percent by weight of the residual weight is considered unsatisfactory, and the test should be repeated.

6. Compute the percent passing (or percent finer) by starting with 100 percent and subtracting the cumulative percent retained for that sieve.

Watch the Video below for clear understanding.

Weight of sample used in this Sieve analysis of soil is 1000 gm.

1. Loose clots may be broken with hands or rubber tipped pestle.

2. The whole set of sieves should be shaken in each direction.

3. Weigh the retained soil on each sieve carefully.

Q & A about Sieve Analysis of Soil.

Q.2: What is meant by the size of a sieve or number of the sieve?
Ans: Sieve number or size means the number of openings per linear inch in a sieve.

Thanks for reading this article. Don’t forget to share it.

2 thoughts on “Sieve Analysis of Soil; Its Determination, Theory, Precautions.”